About 200 people gathered in the East Room of the White House for an elegant dinner of celery soup, mushroom crisps, steelhead salmon, saffron couscous, crispy spinach and greens. Dessert was a milk chocolate velvet cake.

The guests spent about 20 minutes mingling before the Obamas arrived.

"Do not fear -- no long speeches here," the president said to appreciative laughter after shaking hands as he made his way to the podium.

He called the get-together a "timeout" for everyone before returning to the hard work of legislating and governing the country. The dinner, he said, was meant to give the White House and congressional leaders a chance to "step back and remind ourselves we have things in common."

"Not to mention, this is a pretty big house, and we get lonely," he joked.

In a more serious vein, Obama noted "obviously the country is going through an extraordinarily difficult time, and we are going to have some monumental debates taking place over the next several months and years. We also know that we're not always going to agree on everything."

But, he said, "we thought it was important for us to be able to step back for a moment, remind ourselves that we have things in common -- family, friends, laughter -- and hopefully, we'll have a chance to appreciate each other a little bit, take a timeout before we dive back into the game."

U.S. News // 4 hours ago
Air Force helicopter shot at midair, service member injured
Aug. 12 (UPI) -- A military helicopter made an emergency landing Wednesday in Manassas, Va., after it was struck by a bullet, injuring a service member inside, U.S. military officials said. 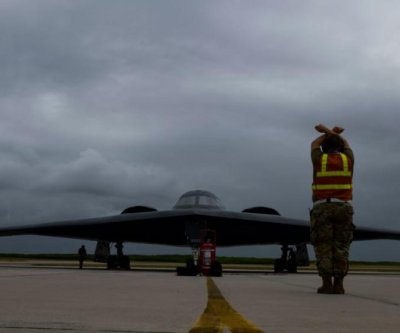