Loren and Piper Stout allege in their federal lawsuit that appropriate steps have not been taken to date to contain the wild mustang and burro population on Oregon's 62,000-acre Murderers Creek allotment, The (Portland) Oregonian said Sunday.

"They have let it get out of hand, and we are getting blamed for it," Loren Stout alleged in the lawsuit against the U.S. Forest Service. "Horses are real tough on resources, and they are out there 12 months of the year."

The couple's lawsuit, which was filed last week in Portland, comes after the Stouts' cattle were accused of damaging the Murderers Creek federal holding facility.

As a result of that allegation, the couple is no longer allowed to graze their cattle on the federal lands. 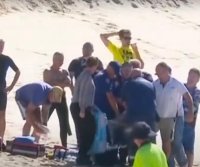 World News // 3 hours ago
Darwin's Arch natural bridge collapses in Galapagos Islands
May 18 (UPI) -- A rock formation in the Galapagos known as Darwin's Arch collapsed this week as the result of natural erosion, the Ecuadorian government announced.

U.S. News // 4 hours ago
Dow falls 260 points as markets reverse from early gains
May 18 (UPI) -- U.S. markets reversed early gains on Tuesday after reports that housing starts had fallen and continued concern over how inflation might affect growth stocks.

World News // 16 hours ago
Nearly entire EU bloc calls for Israeli-Palestinian cease-fire
May 18 (UPI) -- The European Union on Tuesday called for an immediate cease-fire in the fighting between Israel and the Palestinian militant group Hamas, which has claimed more than 200 lives.