COLOMBO, Sri Lanka, Jan. 30 (UPI) -- The estimated 250,000 civilians in the conflict zone in northern Sri Lanka want to stay to be protected by the Tamil Tigers, the rebels say,

Rebel political chief B Nadesan said the civilians did not want to end up in the hands of "their killers," the British network reported.

The European Union on Friday called for an end to the conflict between the Tigers and the government.

"This is an escalating humanitarian catastrophe. We are extremely worried about the terrible situation facing people trapped in the fighting," European Union Humanitarian Aid Commissioner Louis Michel said.

The Daily News and Reports said the Sri Lankan government has repeatedly stated its military actions will continue until all LTTE rebels surrender their arms.

U.S. News // 41 minutes ago
Road salt, electric vehicles, drugs, smartphones can all be affected by really cold temps
Part of the U.S. is going into an extended deep freeze, but how low does the temperature have to be for certain things like your smartphone or road salt to stop working? 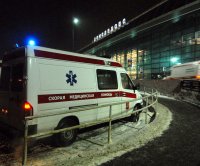 World News // 17 hours ago
COVID-19 cases subside to 8% weekly rise but India, Brazil, Japan surge
Jan. 23 (UPI) -- Two months after the COVID-19 Omicron variant was first reported in South Africa, cases have subsided to an 8% weekly rise, including decreases in some world hotspots but spikes in India, Brazil and Japan.