Swedish Environment Minister Andreas Carlgren said the ban prohibits products containing the heavy metal from being brought to market in Sweden and will become official when the government meets Thursday, the Swedish news agency TT reported.

"Mercury is now dead and buried," Carlgren said, adding that as well as banning products containing mercury, it also prohibits the substance's use in manufacturing processes and in dentistry.

The news agency said certain exceptions will be allowed, and the ban won't come into force for manufacturers until 2013. Environmentalists said the decision makes Sweden and Norway the countries with the most stringent restrictions on mercury in the world.

Analysts told the news agency the ban is the last in a long line of decisions which have reduced the use of mercury in Sweden. 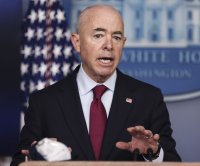 U.S. News // 1 hour ago
U.S. offers Venezuelans TPS protection from deportation
March 8 (UPI) -- The Biden administration on Monday said it will allow potentially hundreds of thousands of Venezuelans already in the United States to remain in the country due to the humanitarian crisis their country faces.