WASHINGTON, Jan. 12 (UPI) -- U.S. President George Bush said Monday his well-wishes to his successor isn't just a casual remark, saying he sincerely wants "all the best" for him.

"It's not a throwaway line," Bush said during his last news conference. "The stakes are high. ... I'm telling you there's an enemy that would like to attack America -- Americans -- again. There just is. That's the reality of the world."

Bush said he wouldn't speculate about any decisions Obama would make.

Bush said he hoped the tone in Washington was different for Obama than for him. While noting that the White House and Congress "did find some good common ground ... the rhetoric got out of control."

He said he considered himself "fortunate to have a front-row seat" for the historic inauguration of the first black president of the United States."

"President-elect Obama's election does speak volumes about how far the country has come," he said. "It's going to be an amazing moment."

U.S. News // 42 minutes ago
Zalmay Khalilzad resigns as U.S. envoy for Afghanistan
Oct. 18 (UPI) -- Ambassador Zalmay Khalilzad has resigned from his post as the United States lead diplomat to Afghanistan following the late summer exodus of the U.S. military from the war-torn country. 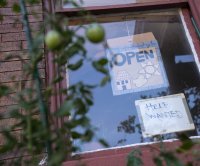