ATLANTA, Dec. 14 (UPI) -- A county prosecutor in Atlanta says potential federal charges against Brian Nichols could result in a death sentence for the convicted courthouse killer.

Fulton County District Attorney Paul Howard said Saturday while his efforts to get the death penalty for Nichols failed, he likely will be talking with federal prosecutors about the possibility of bringing federal charges against Nichols, The Atlanta Journal-Constitution reported Sunday.

The potential federal charges would be for the death of U.S. Customs agent David Wilhelm, one of four people Nichols was convicted of killing on March 11, 2005.

Nichols was convicted of overpowering a sheriff's deputy at the Fulton

While prosecutors had sought the death penalty, Nichols received seven consecutive life prison sentences and four sentences of life without parole, along with 485 years, on Saturday.

U.S. News // 44 minutes ago
Spirit Airlines vows to learn from disruptions, flight cancellations
Aug. 4 (UPI) -- In an effort to reboot its system, Spirit Airlines canceled more than 340 flights on Wednesday after canceling more than 1,000 flights since Sunday. 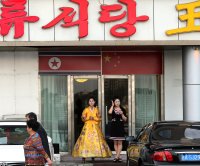 World News // 3 hours ago
WHO chief urges wealthy nations to pause COVID-19 vaccine boosters
Aug. 4 (UPI) -- The head of the WHO on Wednesday called on wealthier countries to stop allowing people who are fully vaccinated to receive booster COVID-19 shots and instead send those doses to poorer nations.