LAS VEGAS, Dec. 5 (UPI) -- O.J. Simpson was sentenced to at least nine years in a Nevada prison Friday for holding up two sports memorabilia dealers at gunpoint in a Las Vegas hotel.

The 61-year-old former football star apologized tearfully, telling a judge he did not realize he was doing anything illegal, the Las Vegas Sun reported. He has consistently said that he was trying to recover his own property.

"This was the first time I had a chance to catch red-handed the people who were stealing from my family," he said. "I didn't mean to hurt anybody and I didn't mean to steal anything from anybody."

A jury convicted Simpson and Clarence C.J. Stewart of kidnapping, robbery, burglary and assault in October.

Thirteen years ago, Simpson was acquitted by a jury in Los Angeles in the murders of his ex-wife, Nicole Brown Simpson, and Ron Goldman.

U.S. News // 12 minutes ago
Remains of missing teen Brittanee Drexel found after 2009 spring break killing
May 16 (UPI) -- Authorities in South Carolina found the remains of Brittanee Drexel, a 17-year-old New Yorker who was raped and killed while visiting Myrtle Beach for spring break in 2009. 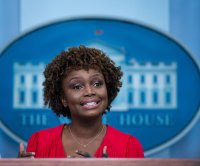 U.S. News // 5 hours ago
Experts advocate better red flag laws as 2022 sees 202 mass shootings
May 16 (UPI) -- There have been 202 mass shootings in the U.S. through the 5 1/2 months of this year, including Saturday's racially motivated attack at a Buffalo, N.Y., supermarket that killed 10. Experts say red-flag laws can help.
Advertisement