LONDON, Nov. 6 (UPI) -- Tons of paper, plastic and metal collected from British recycling bins may be stored at former military bases because of a collapse in prices, officials say.

This is because the "bottom fell out of the market" for mixed plastics, mixed paper and pre-recycled steel, and they are now worthless after reaching record levels in the summer, The Times of London reported.

The price for mixed plastics, for instance, fell from about $320 a ton to nearly zero in only four weeks, said Stuart Foster, a project manager at Recoup, which advises on plastic recycling.

The price plunge was caused by a sudden fall in demand for recycled materials, especially from China, as manufacturers cut their output as the global economy collapsed, the Times said.

Officials from Britain's Department for Environment, Food and Rural Affairs and Wales' Environment Agency are expected to issue new guidelines next week that would relax rules limiting the quantity of waste that can be stored, the newspaper said.

The new rules would also permit thousands of tons of ready-to-be-recycled paper, plastic and metal to be kept in secure warehouses or abandoned military bases and former airfields.

World News // 51 minutes ago
Racist attack of South Korean man in Italy draws outrage back home
June 16 (UPI) -- The South Korean Embassy in Italy confirmed that a Korean national in his 60s was targeted with racial slurs and beaten by a group of Italian teens in Tuscany.

U.S. News // 1 hour ago
GM to boost EV battery, fuel cell spending by 75% due to rising demand
June 16 (UPI) -- General Motors announced Wednesday a plan to spend $35 billion over the next five years to develop electric and automated vehicle technologies. 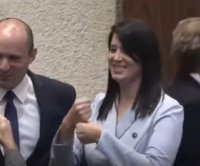 World News // 2 hours ago
Shirly Pinto, Israel's first deaf lawmaker, sworn in by sign language
June 16 (UPI) -- Shirly Pinto on Wednesday became the first deaf member of the Israeli Knesset when she was sworn in by Prime Minister Naftali Bennett.

World News // 2 hours ago
EU diplomats favor adding U.S., several other nations to safe travel list
June 16 (UPI) -- Diplomats in the European Union on Wednesday recommended that the 27-member alliance update its COVID-19 safe travel list to include visitors from the United States, a move that's expected to take effect later this week.