The crowd erupts when it is announced that Democratic presidential candidate Barack Obama was declared the winner in the state of Pennsylvania by the TV networks at the Obama election night rally in Grant Park in Chicago on November 4, 2008. More than 65,000 people are expected at the rally. (UPI Photo/Pat Benic) | License Photo

Kenyan President Mwai Kibaki called it a "momentous day" for the United States and Kenya, as well.

"The victory of Senator Obama is our own victory because of his roots here in Kenya. As a country, we are full of pride for his success," Kibaki said.

British Conservative Party Leader David Cameron said Obama had "made history and proved to the world that it is a nation eager for change."

The BBC reported European Commission leader Jose Manuel Barroso said he hoped Obama's election signaled that the United States will "join forces with Europe" to force "a new deal for a new world."

"France, Europe and the international community need his energy, his rejection of injustice and his determination to go forward to build a safer, fairer and more stable world," Barroso said.

"We don't think there will be change in policy overnight. There won't be quick disengagement here," Zebari said. "A great deal is at stake here."

U.S. News // 4 hours ago
Lawmakers grill HHS nominee Xavier Becerra on Obamacare, abortion
Feb. 24 (UPI) -- Members of the Senate finance committee questioned Xavier Becerra, President Joe Biden's pick to head the Department of Health and Human Services, about his past stances on Medicare for All and abortion rights. 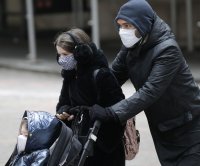