District of Columbia residents cast their votes at a polling location on election day in Washington on November 4, 2008. The country cast their votes today to elect the forty-fourth President of the United States. (UPI Photo/Kevin Dietsch) | License Photo

WASHINGTON, Nov. 5 (UPI) -- Colorado voters Tuesday defeated a referendum that would have criminalized abortion by defining human life as beginning at the moment of conception.

With 78 percent of the vote counted, the measure was failing 73 percent to 26 percent, The Denver Post reported.

The measure would have applied the definition of a person as a fertilized egg to sections of the Colorado Constitution that protect the right to life, liberty and property.

In South Dakota, voters rejected a ban that would have made abortion legal only in cases of rape or if a woman's health is endangered. With all precincts in the state counted, the measure was defeated 55.21 percent to 44.70 percent, results from the South Dakota secretary of state's office showed.

In California, a measure that would require parental notification before a minor could have an abortion was failing narrowly, 52 percent to 48 percent with 52 percent of the vote counted, results from the California secretary of state's office showed.

U.S. News // 35 minutes ago
Zalmay Khalilzad resigns as U.S. envoy for Afghanistan
Oct. 18 (UPI) -- Ambassador Zalmay Khalilzad has resigned from his post as the United States lead diplomat to Afghanistan following the late summer exodus of the U.S. military from the war-torn country. 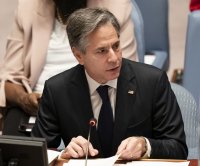 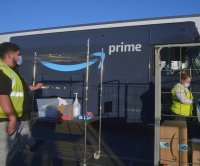