Lynch, 55, campaigned on his ability to manage state finances without an income or sales tax, the (Manchester) Union Leader reported.

U.S. News // 15 minutes ago
Starbucks permanently pulls presence from Russia due to war in Ukraine
May 23 (UPI) -- Coffee behemoth Starbucks announced on Monday that it's exiting the Russian market -- and ending a 15-year relationship -- over the bloody war in Ukraine.

World News // 2 hours ago
Zelensky asks for 'maximum' sanctions for Russia to stop war in Ukraine
May 23 (UPI) -- As Russian forces kept up attacks in eastern Ukraine on Monday, Ukrainian President Volodymyr Zelensky told world leaders that allies must ratchet up economic sanctions against Moscow to put a stop to its aggression. 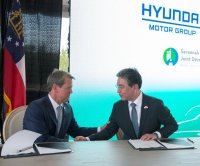 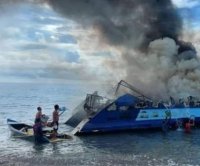 World News // 3 hours ago
Several dead, dozens rescued after passenger ferry catches fire off Philippines
May 23 (UPI) -- Several people died in the Philippines on Monday and more than a hundred were rescued after a ferry caught fire and forced dozens to leap overboard into the sea, authorities said.
Advertisement