Darnell Hartsfield, 47, of Tyler faces life in prison for what a prosecutor called "one big, long armed robbery that turned very, very bad" and left five people dead, KLTV in Tyler reported. A convicted robber, Hartsfield was already serving a life term for a perjury conviction.

The 1983 case started when Opie Ann Hughes, Monty Landers, Mary Tyler, Joey Johnson and David Maxwell were abducted from the fast-food restaurant, driven about 15 miles to a remote oilfield road and then shot. Their bodies were discovered the next morning. All but Landers were KFC employees.

Last year, Hartsfield's cousin, Romeo Pinkerton of Tyler, pleaded guilty in the case and was sentenced life in prison.

Lisa Tanner with the attorney general's office said they believe a third suspect is still at large, KYTX-TV in Tyler reported.

World News // 15 minutes ago
Global Hawk drone flies near North Korea ahead of Korean War anniversary
July 26 (UPI) -- An unmanned U.S. reconnaissance aircraft flew over the Korean Peninsula ahead of North Korea's observance of "Victory Day," which marks the anniversary of the 1953 Korean Armistice Agreement. 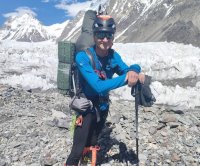