Gerald McEntee, president of the American Federation of State, County and Municipal Employees, said many union workers have told him they cannot support Obama because he is black, The Hill reported Tuesday.

"There are some local union presidents that are afraid -- yes, that's the word, afraid -- to hand out literature for Barack Obama," McEntee said.

He said union members ought to consider Obama's voting record on labor issues, not his race.

He added that Republican presidential hopeful John McCain is not a friend of organized labor. He said Obama needs the union's members to win in some battleground states.

"If we don't win those states -- excuse my language, I know it's early -- but we will be in the proverbial s--t house for the next four years," McEntee said.

World News // 31 minutes ago
Olympics: Tattoos on display in Tokyo despite cultural stigma
July 26 (UPI) -- Tattoos are widely on display among athletes at the Tokyo 2020 Olympic Summer Games, despite the country's longstanding taboos against skin markings.

Defense News // 1 hour ago
Five companies picked for prototypes of Bradley M2 tank replacement
July 26 (UPI) -- Five defense contractors have been awarded contracts for the second phase of development of the Optionally Manned Fighting Vehicle, which is planned to replace the M2 Bradley tank. 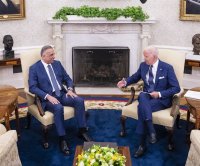