LENEXA, Kan., Aug. 22 (UPI) -- A printing company in Lenexa, Kan., refused to confirm or deny a report Friday it was printing campaign material for an Obama-Bayh presidential ticket.

Bayh is one of several people widely reported to be on Obama's shortlist of vice presidential possibilities -- along with Delaware Sen. Joe Biden, Virginia Gov. Tim Kaine and Kansas Gov. Kathleen Sebelius. News organizations have been trumpeting for days the impending announcement of Obama's choice and the presumptive nominee has said he's decided on a running mate, but his campaign has succeeded so far in keeping the name under wraps.

KMBC said Friday that Gill Studios would neither confirm nor deny it was printing Obama-Bayh material.

Obama has called some of those on his shortlist to tell them they weren't selected, a Democratic Party source said. MSNBC reported Friday that Obama had notified Bayh and Kaine he had not selected them.

Obama is scheduled to attend a rally Saturday in Springfield, Ill., with his choice for vice president. 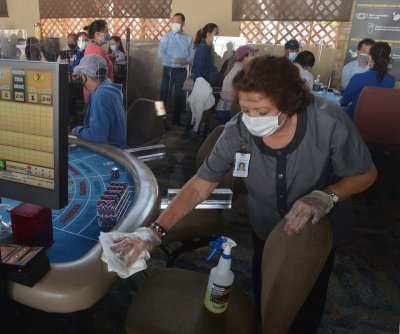 U.S. News // 34 minutes ago
U.S. adds almost 63K COVID-19 cases, more than 1,100 deaths
Oct. 22 (UPI) -- New data from Johns Hopkins University on Thursday showed that another 1,100 people in the United States have died of COVID-19 -- the highest one-day toll in more than a month, as cases continue to surge nationwide.