TBILISI, Georgia, Aug. 9 (UPI) -- European Union and U.S. diplomats were arriving in Georgia Saturday in an attempt to mediate an end to the military conflict, EU sources said.

Despite international appeals, fighting between Russia and Georgia has resulted in at least 1,500 killed in South Ossetia, Russian leaders said. In response, an EU diplomatic delegation headed by South Caucasus envoy Peter Semneby and a U.S. team led by Matthew Bryza was heading to the Georgian capital Tblisi, the EU Observer reported.

Lithuanian foreign minister Petras Vaitiekunas is also going on a separate, fact-finding mission for the EU, the newspaper said.

EU president France says there have been "multiple contacts" with Russia and Georgia and that it is "in liaison with all the protagonists" to hammer out a ceasefire. The Observer said EU foreign policy chief Javier Solana has been in touch with the Georgian and Russian foreign ministers as well.

EU sources said, however, that prospects for a diplomatic solution in South Ossetia is uncertain after a second meeting of the United Nations Security Council Friday failed to produce an agreement on a ceasefire resolution. The United States and Britain disagreed with Russia on the wording of the text.

Bush: China will be 'great nation'

In his weekly radio address -- delivered from Beijing, where Bush attended the opening ceremonies of the Olympic Games -- the president said he was using his visit to China to express "America's deep concerns about freedom and human rights in China."

"This trip has reaffirmed my belief that men and women who aspire to speak their conscience and worship their God are no threat to the future of China," he said. "They are the people who will make China a great nation in the 21st century."

Bush said China had changed a great deal in the three decades since his first visit there when his father, former President George H.W. Bush, was the U.S. ambassador to China.

"Poverty was rampant, and the streets swarmed with bicycles," he said. "Today, China is sprinting into the modern era."

Bush said America has "put our relationship with China on a more solid and principled footing" during his administration, while speaking "candidly and consistently about our concerns over the Chinese government's behavior."

"We have made it clear that trusting their people with greater freedom is necessary for China to reach its full potential," he said.

Mbeki heads to Zimbabwe for talks

Mbeki has been mediating efforts in South Africa this week to persuade Mugabe to share power with Tsvangirai's Movement for Democratic Change party, which has accused Mugabe's regime of killing scores of its supporters in the run-up to presidential elections this year. Tsvangirai pulled out of a run-off election as a result of the escalating violence.

With Mbeki's decision to go to Zimbabwe, some observers say a power-sharing deal may be near, the BBC reported Saturday. The South African president was expected to return home Sunday, sources told the broadcaster.

Despite an official news blackout on the talks, South African media outlets are saying an emerging deal could see Mugabe keeping a grip on the presidency with Tsvangirai becoming prime minister with executive powers. The BBC said Mbeki is facing pressure to produce a workable deal ahead of this month's summit of the South African Development Community.

Clinton, D-N.Y., appearing at her first solo campaign rally for Obama in Las Vegas on Friday, told cheering supporters to disregard any lingering resentment from the bruising Democratic primary election battles and instead back the party's probable nominee, the New York Daily News reported.

"Anyone who voted for me or caucused for me has so much more in common with Senator Obama than Senator McCain," Clinton said, referring to Obama's probable Republican opponent, Sen. John McCain, R-Ariz.

McCain, meanwhile, campaigned in Clinton's former home state of Arkansas, where the newspaper said he is leading Obama in some state polls. Looking to court independent voters, McCain said, "I'm certainly pleased with where we are" in the state.

McCain said his campaign was gaining support among "Reagan Democrats" and others -- "some we might call 'Clinton Democrats' as well," the Daily News reported. 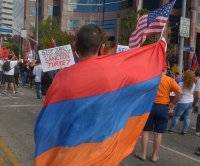