HOUSTON, June 17 (UPI) -- A grand jury in Texas is hearing evidence this week about a Houston-area man who shot and killed two men last year when he caught them robbing a neighbor.

Joe Horn, 62, of Pasadena had not yet decided whether to testify before the grand jury, his attorney, Tom Lambright, told the Houston Chronicle.

Horn now realizes he made a big mistake in November, Lambright said. He had already called 911 about the break-in next door and the operator told him to stay inside and wait for police but he instead went out with his shotgun.

The autopsy showed he shot and killed Diego Ortiz, 30, and Hernando Riascos Torres, 38, both Colombian nationals who were in the country illegally. But Lambright said Horn expected to see the two men running or driving away and thought he would be getting a description for police.

Police said the men had a bag with $2,000 in money and jewelry stolen from the neighbor.

Lambright said his client did not make a legal mistake but one that changed his life.

"I don't think anybody can really appreciate the magnitude that something like this has on a person's personality," he said. 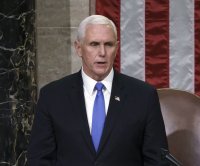 Defense News // 3 hours ago
Army: 'Shortcomings' uncovered in use of helicopters at 2020 protest
April 15 (UPI) -- An Army investigation released Wednesday found that a "systematic lack of understanding" led to the National Guard's use of low-flying helicopters during demonstrations in Capitol One Arena in June 2020.