CONCORD, N.H., March 25 (UPI) -- Gene Robinson, the would-be "simple country bishop" of New Hampshire, can count on attention when he travels to Britain for a worldwide Anglican gathering.

Robinson hasn't been invited to the Lambeth Conference, which brings together bishops from all over the world every 10 years, but plans to be outside, talking to anyone he can reach. His consecration as the church's first openly gay bishop has threatened to split both the Episcopal Church in the United States and the worldwide Anglican Communion.

"One of the things I think I've learned in the last five years is that, as much as I wanted to be known as the good bishop, and not the gay bishop, there's no escaping," Robinson told the Boston Globe. "I would love just to be a simple country bishop but that just doesn't seem to be in the cards."

Robinson has a book coming out next month. In June, he and Mark Andrew, who has been his partner for 20 years, said they plan to commit to each other in a civil union. 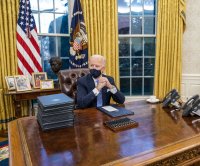