McGreevey's estranged wife, Dina Matos McGreevey, refused to let her daughter attend the party, saying the child was scheduled to be with her that weekend. The couple separated shortly after James McGreevey disclosed he is gay.

The court intervened and Union County Superior Court Judge Karen Cassidy ruled that Jacqueline could attend the party at her father's Plainfield home -- provided she is returned to her mother immediately afterward.

Dina Matos McGreevey, who said she was not aware of the party until two weeks ago, agreed with the compromise.

"The hatred they have for each other overrides everything, including their child," the judge told the parents.

World News // 54 minutes ago
Britain sends patrol ships to English Channel island amid fishery tensions with France
May 6 (UPI) -- The British government said it dispatched two Royal Navy patrol ships to Jersey as tensions over fisheries between the self-governing island and France climb.

U.S. News // 2 hours ago
Atlanta officer fired over shooting death of Rayshard Brooks reinstated, says board
May 6 (UPI) -- The Atlanta police officer charged with murder over the shooting death of a Black man last summer has been reinstated to the force though he will remain on administrative leave. 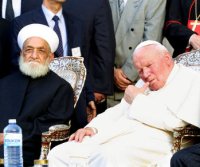 World News // 4 hours ago
G7 expresses concern over China's human rights abuses, calls on it to join int'l system
May 5 (UPI) -- The G7 on Wednesday criticized Beijing for its human rights abuses while calling on it to participate in the international rules-based system.