MANAGUA, Nicaragua, Sept. 6 (UPI) -- More than 90 people have been killed by Hurricane Felix as it roared through Nicaragua and Honduras, La Prensa newspaper in Nicaragua reported Thursday.

Presidents of both nations said the death toll would likely increase as rescuers and residents in storm-ravaged areas repair damage to property.

"We know there are more deaths than official figures but we have to give people hope because many people have been rescued," Nicaraguan President Daniel Ortega said earlier this week.

Ortega said Honduran President Manuel Zelaya had sent word that a planeload of emergency aid would be dispatched, and Venezuela would send tons of metal roofing, food, drinking water and emergency supplies, the news agency said.

As many as 38,000 people have suffered in some way from the storm, officials said, with 13,000 homeless and almost 6,000 homes severely damaged. 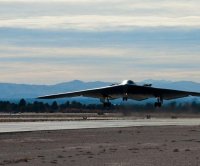 Defense News // 1 minute ago
Three USAF bombers to perform flyover at Super Bowl
Jan. 25 (UPI) -- For the first time, three different bombers will form the flyover at the Super Bowl, scheduled for Feb. 7 at Raymond James Stadium in Tampa, the U.S. Air Force announced on Monday.

Defense News // 6 minutes ago
Sikorsky-Boeing unveils plans for new 'Defiant X,' to replace Black Hawk
Jan. 25 (UPI) -- Details of the Defiant X helicopter, designed by Sikorsky and Boeing as a replacement for the UH-60 Black Hawk helicopter, were revealed by the companies on Monday.