Simpson served at other Louisville spots

LOUISVILLE, Ky., May 11 (UPI) -- Restaurateurs who served O.J. Simpson support Louisville steakhouse owner Jeff Ruby for turning Simpson away on the eve of the Kentucky Derby.

Ruby now faces a possible lawsuit for refusing to serve Simpson who was acquitted of murder but found liable for the wrongful death of his ex-wife, Nicole, and her friend, Ron Goldman, The Louisville Courier-Journal reports.

"I didn't have the huevos to do what Jeff did," says Anthony Lamas, the chef and owner of Seviche, a Latin restaurant that hosted Simpson Wednesday and Saturday.

"I really don't like the guy but I am not his judge and jury," says Matt Mershon, co-owner of Bistro 301 where Simpson went after Ruby asked him to leave.

Mershon added he didn't offer to buy him a round of drinks or invite him to come back next year.

Ruby has said he asked Simpson to leave his restaurant because "he continues to torment the family whose lives he's already ruined 15 years ago."

U.S. News // 1 hour ago
House approves $1B for Israel's Iron Dome missile system
Sept. 24 (UPI) -- The U.S. House of Representatives has approved legislation to give Israel $1 billion to replenish its Iron Dome defense system of missiles it used last Spring during renewed fighting with Gaza militants. 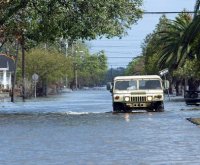 U.S. News // 11 hours ago
2 dead, including shooter, 14 injured in shooting at Tennessee grocery store
Sept. 23 (UPI) -- At least two people were killed and 14 more injured in a shooting at a supermarket in Tennessee on Thursday, police said.

U.S. News // 5 hours ago
Port of Houston targeted in cyberattack
Sept. 23 (UPI) -- The Port of Houston, one of the largest in the United States, announced Thursday that it was the target of a cyberattack last month.

U.S. News // 8 hours ago
U.S. gives $147K to Florida school board that violated DeSantis' mask ban
Sept. 23 (UPI) -- The Biden administration on Thursday provided $147,719 in funding to members of a Florida school board whose pay was withheld for violating Gov. Ron DeSantis' ban on requiring masks in schools.
Advertisement