The Netherlands earned the top spot, performing well in all categories examined by the U.N. children's organization UNICEF. Other Scandinavian nations, including second place Sweden, also performed well, but two of the world's richest countries, Britain and the United States, were ranked last and second to last, respectively.

The United States was tied with Russia for the highest number of teen pregnancies.

"All countries have weaknesses to be addressed" said Marta Santos Pais, director of Innocenti, which conducted the study with UNICEF. "No single dimension of well-being stands as a reliable proxy for child well-being as a whole and several (Organization for Economic Cooperation and Development) countries find themselves with widely differing rankings for different dimensions of children's lives." 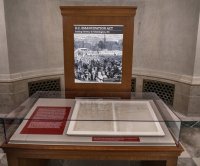 Top News // 3 hours ago
UPI Almanac for Saturday, June 19, 2021
In 1865, nearly two and a half years after the Emancipation Proclamation, freedom from slavery was announced in Galveston, Texas.

U.S. News // 10 hours ago
'Aggressive' man arrested after Calif. Gov. Newsom assaulted in Oakland
June 18 (UPI) -- A 54-year-old man was arrested after allegedly assaulting California Gov. Gavin Newsom as he made an appearance at an Oakland pizza restaurant and barbershop, authorities said Friday.

World News // 14 hours ago
Hyundai acknowledges coolant leak in Ioniq 5
SEOUL, June 18 (UPI) -- Hyundai is under fire from customer complaints that the Ioniq 5 leaks coolant within the first months of usage.