Pelosi, D-Calif., defeated Rep. John Boehner, R-Ohio, 233-202 in a roll-call vote, to become head of the chamber and third in line for the U.S. presidency.

"I accept this gavel in the spirit of partnership, not partisanship, and look forward to working with you on behalf of the American people," Pelosi said in prepared remarks.

"In this House, we may belong to different parties, but we serve one country."

Pelosi, who had her grandchildren in tow, wasted no time in addressing the Iraq war, sure to be a divisive issue in the 110th Congress.

"It is the responsibility of the president to articulate a new plan for Iraq that makes it clear to the Iraqis that they must defend their own streets and their own security, a plan that promotes stability in the region, and that allows us to responsibly redeploy American forces," she said.

Among the issues on the agenda are ethics reforms designed to tackle the "culture of corruption" cited by the party on the campaign trail, including restrictions on the use of corporate jets and rules on gifts and travel paid for by lobbyists. 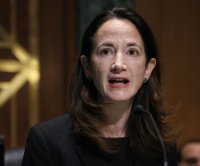