TOKYO, Sept. 12 (UPI) -- The week-old son of Japan's Prince Akishino and Princess Kiko was formally named Hisahito, a name meaning "to live long and at ease in virtue."

The boy is the first heir born to the world's oldest hereditary monarchy in nearly 41 years, standing third in line to the Chrysanthemum Throne after Crown Prince Naruhito, 46, the emperor's eldest son, and his 40-year-old father, the Kyodo news agency reported.

Hisahito, whose name was announced Tuesday, is the first grandson of Emperor Akihito, 72, and the empress, 71, and the 23rd member of the imperial family. He is the third child of Akishino and Kiko, who have two daughters -- Princess Mako, 14, and Princess Kako, 11. 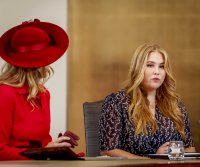 U.S. News // 5 hours ago
Biden pulls nomination for top banking nominee over concerns in Senate
Dec. 8 (UPI) -- President Joe Biden has withdrawn his nomination of Saule Omarova to take over the post, recognizing that she doesn't have the support for Senate confirmation.
Advertisement