The center-right leader, whose tough stand against rebels and militant groups gained him widespread approval, garnered more than 60 percent of the vote in Sunday's election, according to returns.

Uribe earlier this year successfully lobbied to have the Colombian Constitution amended so that he could pursue another four-year term, his second.

The president promised to continue cracking down on violence and drugs during his second term.

Leftist rebels, meanwhile, made good on the their promise not to interfere with the election. 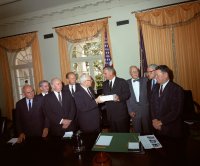 World News // 13 hours ago
Ethiopian military has 'completed and ceased' operations in Tigray
Nov. 28 (UPI) -- Ethiopia's military launched an assault in the capital of the Tigray region in the northern part of the country Saturday.