OKLAHOMA CITY, April 5 (UPI) -- A killer who escaped from an Oklahoma prison with the deputy warden's wife more than a decade ago has been found living with her at a Texas chicken farm.

Randolph Franklin Dial, 60, and Bobbi Parker, 42, were found Monday near Center in East Texas after a tip to the local district attorney, the Oklahoman reported. The tip was generated by TV's "America's Most Wanted."

Parker was being held without bail at the county jail for Oklahoma authorities. Parker, described as an endangered missing person, was not taken into custody.

"As far as I know, she has no intention of leaving," Shelby County Sheriff Newton Johnson told the Oklahoman. "She said she wants to stay on the farm and raise chickens."

Authorities initially believed Parker was kidnapped and held against her will after the 1994 escape, but investigators said it appears Parker has been living with Dial in Texas.

Dial escaped from the Oklahoma State Reformatory in Granite where he was noted for his sculpture, pottery and murals. Parker was the prison art program coordinator. 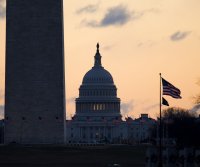 Top News // 6 hours ago
UPI Almanac for Thursday, Sept. 23, 2021
On Sept. 23, 1950, the U.S. Congress adopted the Internal Security Act, which provided for the registration of communists.

Top News // 6 hours ago
On This Day: Congress requires communists to register
Sept. 23 (UPI) -- On Sept. 23, 1950, the U.S. Congress adopted the Internal Security Act, which provided for the registration of communists.
Advertisement