The draft constitution must be ratified by all 25 EU member states through referendums and parliamentary votes over the next two years. Britain will be one of the last to hold a referendum late next year and opinion polls indicate it will vote for rejection.

Charles Grant, director of the Center for European Reform think tank, said he has been told by officials from Germany, France and Belgium there are plans for a core of pro-integration states to proceed in a different direction.

They would work on eight or nine chosen goals, such as merging their armed forces and embassies, Grant said. France and Germany would lead the core, inviting Belgium, Luxembourg, and other pro-integration EU states to join them, making Britain much less relevant.

The plan also calls for harmonization of criminal and civil law, the establishment of a European criminal court and tax harmonization and a single seat for core countries in international financial institutions. 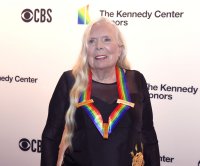 World News // 10 hours ago
Pope Francis says COVID-19 'fake news' is spreading
Jan. 28 (UPI) -- Pope Francis said that "fake news" about COVID-19 is spreading and that access to truthful information is a "human right" during an address to Catholic journalists Friday.

U.S. News // 10 hours ago
Serial killer identified by Denver police 40 years after murders of five women
Jan. 28 (UPI) -- A serial killer has been identified more than 40 years after he murdered three women and a pregnant teenager, as well as an Aurora police officer, the Denver Police Department announced Friday.