SAN FRANCISCO, April 14 (UPI) -- A California judge has ordered a former member and longtime critic of the Church of Scientology to pay it $500,000 for criticizing the group.

The Scientologists had sought $10 million from Armstrong, who joined in 1969, left in 1981 and later became a prominent critic.

In settling that case, Armstrong had agreed to return the documents and not speak about Scientology -- or else pay $50,000 for every such utterance.

On Tuesday, Duryee ordered Armstrong to pay $500,000 to the Scientologists. 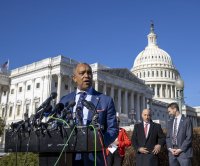