WASHINGTON, April 30 (UPI) -- Homeland Security Secretary Tom Ridge admitted to a congressional panel Wednesday that he could not say when he would complete work to consolidate the government's 12 different terrorist watch lists -- gaps in which enabled several of the Sept. 11 hijackers to enter the country more than 18 months ago.

"I can't give you a specific timeframe," Ridge told the Senate Appropriations Subcommittee on Homeland Security.

"I think we're fairly close to finalizing the consolidation itself," he went on, but he added "the next piece of that is making sure that we've got the technology to distribute" the consolidated list to the officials in law enforcement agencies around the country that need it.

Responding to questions from the committee chairman, Sen. Thad Cochran, R-Miss., Ridge said he would be able to provide more specific information within "a couple of weeks."

A report Wednesday by the General Accounting Office, the investigative arm of Congress, found that the nine federal agencies that maintain the 12 lists were not sharing data from them in a way "consistent with the president's strategy and recent legislative direction."

The lack of a consolidated, integrated watch list that could be shared between federal government agencies and with local law enforcement had disastrous consequences in 2001.

Khalid al-Midhar and Nawaf Alhazmi, two of the hijackers who seized American Airlines flight 77 and slammed it into the Pentagon were on the CIA watch list before Sept. 11.

Both men were issued visas by the State Department and lived openly in San Diego. Al-Midhar left and re-entered the country.

Ridge said the work of consolidation would not be complete until the establishment of a new center where various federal agencies will share data about terror threats.

"This work will be facilitated enormously as the result of the creation of the president's Terrorism Threat Integration Center, which will be the venue (where) this kind of information is consolidated," he said.

Ridge said that the TTIC, once up and running, would also start compiling files on potential terrorists, "working on individuals, and building up the kind of information base about these individuals and their potential conduct."

The GAO report said that even the basic information technology architecture to facilitate sharing among agencies was absent.

Sen. Robert Byrd, D-W.Va. Byrd said he was concerned by legislation which allows data about critical infrastructure passed by private companies to the department to be exempted from the Freedom of Information Act.

"The American people ought to have access to information that directly impacts their freedoms and safety," he told the hearing, according to a transcript produced by his staff.

"How do we know that the department is not just turning over the safety of the American people to the administration's friends in the private sector, like many believe has been done for the reconstruction of Iraq?" he asked.

"The regulations to which you refer do not in any way relieve any company from its responsibility to provide information that may otherwise may be dictated by any other law or any other regulation," Ridge responded, explaining that the exemption was to make it easier to get potentially commercially sensitive data from the private sector.

"The purpose of this exemption in the Freedom of Information Act is to get the voluntary submission of information from companies that is otherwise not required as it relates to potential vulnerability of their facilities."

Byrd is cosponsoring a bill that would tighten the exemption.

Ridge also said that his department could not yet put a precise cost on Operation Liberty Shield -- the massive security effort to protect the United States from any terrorist attacks launched as a result of the war on Iraq.

The department was allocated $3.5 billion in the recent emergency supplemental spending bill -- much of which is to reimburse state and local governments for their costs in guarding critical infrastructure like bridges and power plants around the clock. But Ridge said, because the exercise was "the first of its kind," he could not yet be sure it was enough.

"We think from preliminary reports that we will have sufficient dollars but one of the lessons we will learn from this very successful exercise is basically the cost associated with providing certain kinds of protection to certain pieces of critical infrastructure that we can use in future years to compute very appropriately the levels of reimbursement that state and local (governments) should receive."

The hearing examined the department's first ever annual budget -- for financial year 2004 -- a $36.2 billion request, which Ridge said represented an overall 7.4 percent annual growth in spending. 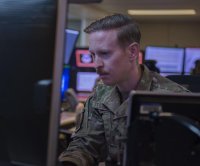