Anti-war protesters blocked traffic in San Francisco's Financial District and downtown Chicago Thursday and demonstrators rallied and marched in the streets of New York, Washington and Philadelphia protesting the U.S. invasion of Iraq.

San Francisco police arrested 1,025 demonstrators after thousands had gathered for a peaceful noontime rally at the Civic Center. The crowd chanted "No justice, no peace, U.S. out of the Middle East" before marching off to the Federal Building, Financial District and other locations where the arrests began.

Mayor Willie L. Brown said while he respected the protesters they would not be allowed to create chaos in the city.

"I respect the tradition of protest in this nation, my own political roots are in fact steeped in this tradition," Brown said. "I must express my frustration at the tactics of some protesters, who have chosen to specifically try to disrupt this city, rather than gather peacefully to voice their desire for peace, at the expense of the day-to-day lives of ordinary San Franciscans at a great cost to this city.

"It is one of the painful ironies of this war that one of the most anti-war cities in the nation, San Francisco, is being disproportionately harmed by the tactics of anti-war protesters."

In Washington, demonstrators gathered in Lafayette Park near the White House in the cold and rain chanting "Bush we want peace, U.S. out of the Middle East."

Thousands of protesters carrying signs reading "Drop Bush, not bombs" and "No blood for oil" rallied in Chicago's Federal Plaza and marched through the Loop in two directions under the watch of mounted police officers.

About half a dozen pro-war demonstrators across the street held signs reading "Bomb Saddam."

The march swelled to 6,000 to 7,000 protesters at Michigan Avenue and Chicago Avenue in the fashionable Magnificent Mile shopping district Thursday night and protesters began running skirmishes with police in full-riot gear. At least 200 people were arrested when police formed a line to halt the march and clashes erupted. A few protesters taunted officers but most simply walked back as instructed easing the tension but refusing to disperse. Traffic was halted for hours on Lake Shore Drive.

Police conducted mass arrests taking the protesters away by the busload.

Demonstrators planned an 8 a.m. rally Friday before beginning non-violence civil disobedience at government offices and the corporate headquarters of Boeing Co., the second largest U.S. defense contractor, the Leo Burnett Building and the Dirksen and Kluszensky federal buildings. Supporters of the war in Iraq scheduled a rally in Federal Plaza Saturday afternoon.

Three members of the Chicago Student Moratorium Against War on Iraq were charged with criminal damage to property Wednesday for writing "No War" in chalk on the side of the Leo Burnett Building.

The Burnett ad agency produced the U.S. Army's awarding-winning "Army of One" recruiting campaign targeted at high school and college students. According to a recent MTV News report the average age of a military recruit is 18-23 and 75 percent of the U.S. Marine Corps is under age 22.

"By singling out student organizers, the police have threatened the entire student movement and all of our civil liberties," said Daniel Lichtenstein-Boris of the group No War on Iraq at the University of Chicago. Students walked out at the School of the Art Institute of Chicago, DePaul University, Northwestern, Loyola, Northeastern, Roosevelt University, the University of Illinois, Harold Washington College and dozens of area high schools.

The call for public school walkouts did not sit well with Chicago Mayor Richard M. Daley. "Walking out. What's with that?" asked Daley. He said teachers should spend time teaching children about the history of Iraq.

A 16-year-old honor student at Dearborn High School near Detroit caused a free-speech furor Feb. 18 when he wore an anti-war T-shirt with a photograph of Bush between the words "International Terrorist."

The Michigan American Civil Liberties Union plans to file a lawsuit on behalf of Bretton Barber, who purchased the T-shirt on the Internet. School officials have told the junior not to wear the shirt at the school where more than half the students are Arab-American.

The Council on American-Islamic Relations said a Muslim father and son were refused service at Meijer superstore in Fraser, Mich., where a cashier refused to accept a credit card payment for gasoline. The clerk allegedly shouted, "You Arabs get out of here ... we don't want to serve you guys ... go back to your country ... dirty Arabs."

"These campus peace resolutions parallel similar resolutions passed by over 150 U.S. city councils across the country. They reflect the growing concerns among young people about a U.S. pre-emptive strike against Iraq," said Juliette Niehuss, Campuses for Peace coordinator of the Washington-based Cities for Peace, Institute for Policy Studies.

World News // 9 minutes ago
Russian riot police arrest 1,700 during rallies to support Alexei Navalny
April 22 (UPI) -- Close to 2,000 people have been arrested across Russia while marching to support jailed Kremlin critic Alexei Navalny, who is said to be seriously ill in the hospital.

U.S. News // 53 minutes ago
House expected to pass bill Thursday in favor of making D.C. 51st state
April 22 (UPI) -- After it failed in Congress a year ago, a bill that would make Washington, D.C., the 51st state in the union is again expected to pass in the House on Thursday. 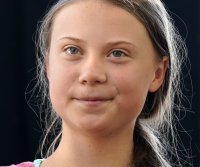 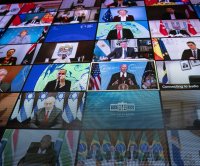