GREENACRES, Fla., Jan. 24 (UPI) -- The daughter of a family whose home was searched by the FBI said from Saudi Arabia this week that agents have already apologized to her.

The 26-year-old schoolteacher said from Saudi Arabia the family had no connections to terrorist groups.

She said FBI Agent Waldo Longa "apologized. He said it was a mistake. I don't blame anyone. We feel so bad because this has affected our family. We are very clean."

The FBI continued to decline comment on the search, but sources told the Herald were continuing to check whether Madawi Almasri's father, Mohamad Almasri, 57, had financial links to terrorist organizations.

Madawi Almasri said she first heard about the search from a friend who saw it on television.

"Look at the pictures on TV," her friend said.

"I called the FBI and asked what was going on. 'Why are you at my house?'" she said.

Neighbors had been suspicious because some family members left the home for Saudi Arabia two days before the Sept. 11 attacks and Mohamad Almasri and his 22-year-old son Turki left three days afterward.

They also said Turki Almasri was a student pilot in Florida, like some of the Sept. 11 terrorist hijackers.

Three south Florida lawmakers -- Democratic Sen. Bob Graham, Rep. Mark Foley and Rep. Robert Wexler -- wondered why it took more than a year for the FBI to start the investigation.

"This shocks me," said Foley, a Republican.

"Most people always want to give the FBI the benefit of the doubt, but this scenario is screaming out one question: Where was the FBI for 15 months?" said Wexler, a Democrat whose district includes the house. 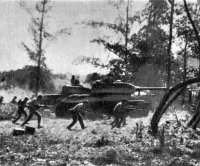 Top News // 9 hours ago
On This Day: Bay of Pigs begins
April 17 (UPI) -- On April 17, 1961, a force of anti-Castro rebels began the Bay of Pigs Invasion in an attempt to overthrow Cuba's new communist government.

Top News // 9 hours ago
UPI Almanac for Saturday, April 17, 2021
On April 17, 1961, a force of anti-Castro rebels began the Bay of Pigs Invasion in an attempt to overthrow Cuba's new communist government.