Book Review: Believe it or not

WASHINGTON, Dec. 28 (UPI) -- Whether President Abraham Lincoln ever really observed that "You can't fool all of the people all of the time" or not is a matter over which historians still quibble. Some people believe Lincoln made the remark to a White House visitor as Alexander McClure states in his "Lincoln's Yarns and Stories." Others believe it is, like so many things attributed to the 16th president of the United States, apocryphal.

In either case, P.T. Barnum proved the statement wrong, no matter who said it.

Barnum, the 19th century showman whose name appears on animal crackers and on the circus he helped make famous, was a master hoaxer. He fooled people from sunup to sundown and made a fortune in the process.

One famous story holds that he posted signs in his museum of oddities pointing the way to "The Egress." Visitors who followed the signs, expected to come face to face with some new and marvelous creature would instead find themselves outside the museum in short order, "egress" being a synonym for "exit."

Most people probably laughed at the joke that had been played upon them so well -- though not after discovering they would have to once again pay the price of admission to get back inside.

Though Barnum brought legitimate acts like Jenny Lind, the Swedish Nightingale and quasi-legitimate acts like Gen. Tom Thumb, a midget whose biography was somewhat fabricated to make him even more interesting, it was his obvious frauds -- like the woman whom he exhibited in 1835 claiming she had been George Washington's nurse (making her 161 years old) -- that are still the most entertaining.

That Barnum still remains a popular figure in U.S. history speaks to an oddity in the national character. Americans love to be fooled -- though they hate to be made the object of ridicule -- and then love to have the hoax exposed so that they can see how it was done.

In "The Museum of Hoaxes," writer Alex Boese chronicles many of the best hoaxes perpetrated on the public going back to medieval times. Though it is by no means the definitive examination of the subject or a serious study of its sociological impact it is one very fun read.

Boese is very selective in those events he chooses to label hoaxes. According to him a hoax must be a deceptive act designed to fool large numbers of people that must also be "somehow outrageous, ingenious, dramatic or sensational" so as to command the attention of the public. In his lexicon, hoaxes differ from frauds, which are criminal acts; pranks, mischievous tricks played upon a small number of people; urban legends, the false stories that circulate through the culture by word of mouth or, nowadays, on the Internet; and tall tales, which most people assume to be false when repeating them -- like the stories of the jackalope or Pecos Bill -- yet they try, with a wink and a nod, to present them as true.

As Boese documents in his book, the development of systems of mass communication made the successful promulgation of hoaxes and their debunking much easier. The 1726 hoax by a woman named Mary Toft who purported to give birth to rabbits could not have acquired the same veneer of truth in the mass media age as it did in the 18th century because it would be too easy to disprove. A story like that only works if spread by word of mouth.

Conversely, it was only the development of mass communication that made some of history's most notorious hoaxes possible. Without radio Orson Welles and "The Mercury Theater of the Air" could never have convinced so many people that invaders from Mars had landed at Grovers Mill, N.J., on Halloween 1939.

And without television, the idea that aliens had crashed in Roswell, N.M., sometime in the 1940s or 1950s and that the U.S. government was in possession of the remains of the spacecraft and its occupants would be laughable as it may still be. Nevertheless it was only through the skillful manipulation of photographs and film footage that large numbers of people, raised to believe that which they saw with their own eyes, could be persuaded that the story might be true.

If you are one of those people who enjoys amazing friends and colleagues with displays of interesting and utterly useless knowledge then Alex Boese's collection of hoaxes is for you.

("The Museum of Hoaxes -- A Collection of Pranks, Stunts, Deceptions and Other Wonderful Stories Contrived for the Public from the Middle Ages to the New Millennium" by Alex Boese. Dutton, 266 pages, $19.95.)

(Peter Roff, a senior UPI political writer and columnist, has long be fascinated with efforts to fool the American people. As a collegian he had a reputation among his fellow students as a master of the practical joke.)

World News // 57 minutes ago
New tropical storm in central Atlantic grabs the name Wilfred
Hot on the heels of the latest tropical depression in the Gulf of Mexico, yet another disturbance AccuWeather meteorologists have been monitoring since it cruised across Africa has become Tropical Storm Wilfred.

U.S. News // 8 hours ago
CDC walks back COVID-19 guidelines, now urges tests for asymptomatic
Sept. 18 (UPI) -- The U.S. Centers for Disease Control and Prevention changed its testing guidelines Friday, saying anyone exposed to someone with COVID-19 should be tested for the virus, even if they're asymptomatic.

World News // 2 hours ago
Amal Clooney quits as British media envoy over plan to break EU treaty
Sept. 18 (UPI) -- Human rights lawyer Amal Clooney on Friday resigned her role as Britain's envoy on media freedom in response to the country's plan to break part of its Brexit agreement with the European Union. 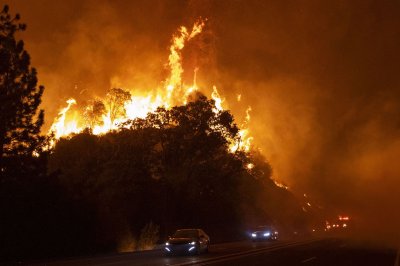