The Peter Principles: A bumpy ride in '04

WASHINGTON, Nov. 26 (UPI) -- For those who look at elections as isolated moments in time, the reasons for the November 2002 GOP victory seem, in hindsight, obvious.

Bush's last-minute jaunt, which many analysts say spiked a pro-GOP turnout, certainly helped. But it only helped because the races in the places Bush went were already competitive.

The story is actually much bigger than the Democrats lack of a coherent message or the Republican success in voter turnout efforts.

Underneath all of the analysis that has been used to explain the election is one particularly salient fact: the Republicans went into the campaign in better field position than at any time since the 1920s -- the result of hard work and careful planning over many years.

The Republicans have won the majority in the House in the last five elections -- their longest period in leadership since Calvin Coolidge and Herbert Hoover were president. This is nothing short of an extraordinary comeback from the dark days following Watergate when the GOP was almost wiped out.

Ronald Reagan's election in 1980 was one sign of reemerging strength. The fact that Reagan was strong on national defense and a cultural conservative made him a Republican southern Democrats could comfortably vote for, giving the party a new lease on life in what was for it, a new region of the country.

What started with Reagan came to fruition in 1994.

That year's GOP landslide proved the Republicans had become competitive with the Democrats in most every part of the country. This was not something they had ever shown, not even in their post-McKinley dominance that lasted until the Great Depression.

The new congressional lines that were first used in November 2002 have cemented that majority.

The conventional wisdom held that redistricting had been a disappointment for the Republicans because they had not been able to achieve major gains in any single state. What the conventional wisdom missed, however, was that the GOP, while unable to increase the ceiling on their majority in the House, raised the floor quite a bit.

The post-2000 redistricting broke up Democrat-drawn districts in Pennsylvania, Texas and Florida, to name but a few. The Republicans won just about 53 percent of the total vote for Congress in the 2002 election and have just about 53 percent of the seats. The returns show that many of the Republicans first elected after 1994 in what are called marginal seats -- that had been drawn by the Democrats to produce Democrat winners -- are now safely Republican. Some may call this a new GOP gerrymander but, when compared with the voting trends at the national and statewide level, it appears to be much more a reflection of the attitudes and leanings of the voting public.

The results from November do not contain much encouraging news for the Democrats looking ahead to the next election. There were 22 Republicans and 27 Democrats who won with 55 percent of the vote or less -- 55 percent is the political dividing line between a safe and a marginal seat.

That is a relatively even split except for two things: 19 of those seats had no incumbent in the race and 7 represent races where a challenger beat an incumbent. The thin margin of victory in races like these is deceptive.

If history is any guide, most of these newly elected members will post much better numbers in 2004 after having had two years to maximize the benefits of their incumbency.

The same is not true for most of the 22 veterans who won by similarly narrow margins. They are a known but apparently not very well liked by the voters they represent.

The only veteran Republican who won with less than 50 percent is Henry Bonilla of Texas. Yet there are a number of reasons to suspect his poor showing is a genuine aberration rather than a downward trend including technical problems with the balloting in the district as well as the overlay of several statewide races that will not be present in 2004.

The Democrats have two incumbents who won re-election with less than 50 percent of the vote -- Dennis Moore in Kansas and Jim Matheson in Utah -- two seats that are strongly Republican at the presidential level.

The lone Republicans polling above 50 percent but under 51 percent is John Hostettler of Indiana. The Democrats have five veterans at that level of performance: Baron Hill of Indiana, Ken Lucas of Kentucky, Joe Hoeffel of Pennsylvania, Charlie Stenholm of Texas and Rick Larsen of Washington state.

At the "above 51 percent but under 52 percent" margin are Republicans Anne Northup of Kentucky and Jim Leach of Iowa and Democrats Earl Pomeroy of North Dakota and Chet Edwards of Texas.

Taken together, the GOP has a little better than 2-to-1 advantage over the Democrats where the most vulnerable of these vulnerable incumbents are concerned. They have less to defend and, when the 2004 presidential race is put on top, many more targets of opportunity.

Texas, Kansas, Utah, Indiana, Kentucky and North Dakota all should post solid numbers for Bush while the Democrats can be expected to run a competitive race for president -- depending on their nominee -- only in Iowa, Washington state and Pennsylvania. Anyone who thinks the Democrats can take back the House in 2004 must, to quote Bette Davis, "Fasten your seatbelts; it's going to be a bumpy ride."

The Peter Principles is a regular column on politics, culture and the media by Peter Roff, UPI political analyst and 20-year veteran of the Washington scene. 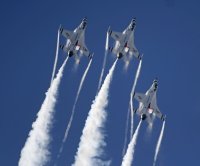 Defense News // 1 hour ago
Low flight hour causing more military crashes: report
Dec. 3 (UPI) -- Flight hours are down and training waivers are on the rise among military pilots, making military flights riskier, according to a new report from a commission convened to investigate the cases of military aviation crashe 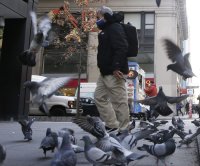