The Institute for Public Accuracy

"It's good under the circumstances that the program is being extended for another six months -- it keeps people alive -- but it should not be necessary. We should have given the economy back to the Iraqis as a prelude to (the recent U.N. Security Council resolution) 1441. It would have made sense to get rid of the deadly economic sanctions as part of an agreement to ensure Iraqi compliance with the weapons inspectors. Right now, there's no incentive for compliance -- other than to avoid death. But the Iraqis seem to have it right when they say the United States is moving to attacking Iraq regardless of Iraqi compliance. An increase in the current U.S. bombings or an all-out attack or invasion will have devastating consequences for ordinary Iraqis; the ports might well get closed down, distribution systems get shut down. We have to look at the human consequences."

-- As'ad Abukhalil, author of the forthcoming book "The House of Bush and the House of Saud," Abukhalil is associate professor of political science at California State

"As critical as I've been of the Saudis, the current attack on them needs to be scrutinized. The 'Karzai Syndrome' is now operating in the Mideast. The United States will not tolerate any independence on the part of its clients. If you give the U.S. government 100 percent and disregard your population, you end up like (Afghan President Hamid) Karzai -- you have to have U.S. bodyguards. The Saudis have been very pro-United States, but now this is not sufficient and the United States is interfering in the Saudi succession struggle. Jordan on the other hand is doing everything the United States wants, so it's getting $400 million -- and it has massive protests."

-- May Kheder, attorney Kheder was among the scheduled speakers at a news conference outside the White House in Lafayette Park just after President Bush's signing of the Homeland Security Act Monday afternoon.

"The Homeland Security legislation flies in the face of our Fourth Amendment protections of 'the people to be secure in their persons, houses, papers, and effects ... The Total Information Awareness Program, headed by John Poindexter, will be able to know what Web sites we surf, what food we order, our bank transactions, etc. Ironically, this microscopic intrusion into our lives is being done in the name of freedom and democracy."

WASHINGTON -- Why not sue 'big schooling'?

Many people have chuckled at stories about people suing the "Big Food" and "Big Tobacco" industries. As frivolous as these cases may be, we should get serious about similarly charging the public school system with committing widespread educational malpractice.

Educational malpractice is commonly defined as the failure to adequately educate a student. What else can we call it when, according to the National Institute for Literacy, an estimated 23 percent of people in America (almost 50 million people) are functionally illiterate despite attending school for years. The American Council of Life Insurance reports that three-quarters of Fortune 500 companies provide some level of remedial training for their workers.

Numerous dysfunctional public schools continue to compel student attendance even when it is clear that the teachers and administrators cannot educate and generations of students are not learning.

So far, plaintiffs have lost almost every case in which they have alleged educational malpractice, and had temporary wins reversed on appeal. Faye Hardy-Lucas of Hampton University warns that courts have been very reluctant to create a cause of action for educational malpractice, citing that there is no satisfactory standard to measure an educator's conduct, that permitting such claims would flood the courts with litigation (my emphasis), and that the courts are not equipped to oversee the day-to-day operation of educational institutions.

The first widely publicized case claiming educational malpractice was a 1976 suit brought by a high school graduate in San Francisco who could read at only the fifth grade level. The court found there was no duty for the state to provide a minimum level of skill and "thus no cause of action in negligence."

In other words, schools have an obligation to mandate schooling, but not to guarantee that graduates can read their own diplomas.

Former college basketball player Kevin Ross settled out of court with Creighton University in 1992 for $30,000, charging it with educational malpractice, negligent admission, and emotional distress. He earned 96 credits while taking courses such as "Marksmanship," "Theory of Basketball," "Theory of Track and Field," and "Squad Participation."

After leaving Creighton, Ross went back to school -- elementary school. Ross, who stands 6' 9", was learning how to read along with 2nd and 3rd graders at a Marva Collins private elementary school in Chicago.

It turned out that Ross was "schooling disabled," not learning disabled. In just nine months at the Marva Collins school, Ross' reading ability jumped several levels. Last seen, he was working as a janitor at the high school he starred at as a basketball player. In addition to suing his university, he should have sued the elementary and secondary schools and teachers who allowed him to slip through to the 12th grade barely able to read his own name.

Some educators basically admit malpractice by allowing inept teachers to remain in classrooms. According to the president of the school board of the District of Columbia, 50 percent of public school teachers in the District are incompetent. She backed off that statement after protests from the Washington Teachers Union, saying instead that half of high school public school teachers are incompetent.

The current superintendent of D.C. schools agreed, saying many of the city's public school teachers are B- or C- teachers who couldn't get hired anywhere else. His predecessor called the city's dismal scores on standardized achievement tests evidence of "educational genocide."

It should be no surprise that, according to the D.C. State Education Agency, 37 percent of D.C. residents read at or below the 3rd grade level. Despite the blatant failure of D.C. schools, every elected official is opposed to offering alternatives to children outside the public system.

Ronald Standler, a former professor and now an attorney in Massachusetts, has suggested that torts may be appropriate for particularly outrageous failures of the educational system (e.g., classifying a deaf pupil with normal intelligence as retarded or giving a high school diploma to a pupil who is functionally illiterate).

(Casey Lartigue is an education analyst at the Cato Institute.) 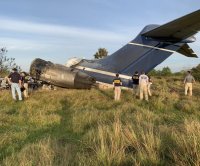 U.S. News // 7 hours ago
NTSB recovers fire-damaged flight recorders from Texas plane crash
Oct. 20 (UPI) -- Officials with the National Transportation Safety Board investigating the crash of a Boston-bound plane said that they have retrieved the flight recorders and have begun to interview passengers, crew and witnesses.