WASHINGTON, Nov. 6 (UPI) -- Incumbents prevailed over challengers in the U.S. House of Representatives as the Republicans maintained control of the chamber and seemed poised early Wednesday to add to their slim majority.

At just after 1 a.m., Republicans had won 219 seats to 196 Democrats, giving them control of the chamber. The results dashed what had been Democratic optimism that the House could swing their way.

Going into the contest, Republicans had controlled 222 seats to the Democrats' 208 -- with three seats vacant and two held by independents. As the voting began, only about a dozen seats seemed too close to call and only a few dozen polled close enough for a possible upset.

That put Democrats in the difficult position of having to win virtually all the competitive seats if they were to gain the seven seats they needed to take over.

With the party that controls the White House usually losing seats during midterm elections, Democrats had hoped to take advantage of a sputtering economy and a series of high-profile corporate scandals to regain control of the House and increase their single-vote majority in the Senate.

But with the debate over a resolution authorizing the use of force in Iraq and a president with a 60 percent-plus approval rating, a large wave of vulnerable incumbent Republicans never materialized.

President George W. Bush and Vice President Dick Cheney also made good use of the administration's popularity by raising large sums for Republican candidates and sweeping into districts with tight races to support GOP candidates in the final weeks of the races.

Democratic National Committee Chairman Terry McAuliffe said in a CNN interview that the campaigning by the president was the critical factor that hurt his candidates.

"We're certainly delighted with what has come through so far but there is a lot left to unfold," he said. "We've always had the belief that retention of the House and picking up the Senate were within our grasp as long as we worked hard and presented a message that resonated in the lives of the people. I think the message of this election, if there is one, is that the American people have entrusted us to proceed in a bi-partisan fashion, as they have trusted the president in the past, on the issues that are most important to them."

Earlier Tuesday, House Democratic Leader Dick Gephardt, who won his own race in Missouri, said that the results from individual races had not dampened his belief that his party would retake control of the house.

"Not one of these results will make us or break us," he said.

Adding a little drama to the otherwise mostly status quo results in the House was the Tuesday evening revelation that the Voter News Service -- a consortium of major media organizations -- would not be releasing predictions based on exit polls.

Instead, reporters, pundits and political operatives had to wait for projections based on the actual vote counts.

Of the incumbents who lost on Tuesday, the Democrats suffered one surprising loss -- Rep. Karen Thurman lost to Republican Virginia Brown-Waite, in Florida's 5th District. In Maryland's 8th, GOP Rep. Connie Morella, lost to former Democratic state Sen. Chris Van Hollen in a race that some Democrats hoped would mean the margin between minority and majority status in the House.

In a battle of redistricted incumbents, GOP Reps. Chip Pickering of Mississippi and Nancy Johnson of Connecticut beat out Reps. Ronnie Shows and Jim Maloney in head-to-head contests.

In the New Mexico 2nd District, Republican Steve Pearce maintained a slight lead with just over 50 percent of the vote. Democrat John Arthur Smith trails with just over 40 percent with more than half of the precincts having reported.

Republican Rick Renzi had 37,380 votes in Arizona's 1st District, while Democrat challenger George Cordova had 33,250 votes, according to the Arizona Secretary of State's tallies of 51.3 percent of the precincts.

U.S. News // 47 minutes ago
Grand jury indicts Buffalo, N.Y., shooting suspect
May 19 (UPI) -- A grand jury has returned an indictment for the suspect in a mass shooting at a Buffalo, N.Y., grocery that killed 10 people, prosecutors announced Thursday during a court hearing.

World News // 51 minutes ago
President Joe Biden turns focus to Asia on Japan, South Korea trip
SEOUL, May 19 (UPI) -- U.S. President Joe Biden kicks off a trip to South Korea and Japan on Friday, with North Korean provocations, an assertive China and stronger economic and defense ties with allies set to be high on the agenda. 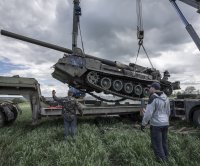 World News // 3 hours ago
Israeli military won't probe death of Palestinian journalist
May 19 (UPI) -- Israel's military has no plans to open a criminal investigation into the death of al-Jazeera journalist Shireen Abu Akleh, a Palestinian American who was shot while reporting on an Israeli raid.
Advertisement