WASHINGTON, May 22 (UPI) -- Eminent domain -- the government's Constitutional right to appropriate private property for public use, with fair compensation paid to the property owner -- has never been a happy topic, especially for the property owners involved.

In recent years several high profile cases have made the issue even more volatile as the practical definition of eminent domain has evolved, some say for the worse.

At a recent think tank forum on the issue, one participant cited "the unholy and unethical alliance of business and government" that has expanded eminent domain to include the government-backed, forced taking of private property not for public use, but for commercial use by private companies, ostensibly in the public interest.

"...(To) take someone's home, someone's small business, and give it to Costco or Home Depot or Nissan, or some locally politically connected developer," said Scott Bullock, a senior attorney with the Institute for Justice, at the May 14 debate at the libertarian Cato Institute. "That is what happens in situations of eminent domain abuse."

Bullock -- whose libertarian legal advocacy group fights on behalf of those facing such takings of their property -- believes that eminent domain does have a valid purpose. But he argued that the aggressive use of eminent domain by municipalities and public redevelopment agencies in the name of progress often represents a violation of the U.S. Constitution, because it often results in significant financial gain for private actors at the expense of the rights of those whose land is taken.

According to Bullock, this modern abuse of eminent domain began with the 1954 U.S. Supreme Court decision Berman v. Parker, which upheld the federal program for urban renewal. In that decision, the court interpreted the Constitution's definition of eminent domain to include the taking of property for "public purposes."

Federal courts, he says, broadly interpreted this ruling, and "public purpose" ultimately came to be read as "public benefit."

"Once an exception to the Constitution is made, the exception continues to expand and represents the rule," said Bullock. "'Public use' became 'public purpose.' This greatly undermined the protection for property rights."

Bullock said this interpretation has lead local governments to use eminent domain to seize land and give it to new owners not simply to clean up urban blight or build a road -- which would constitute "public use"-- but on the grounds that the land's owner was not creating as many jobs as could another owner. This could be interpreted as being for "public purpose" because it could be argued that the community would be benefited by the additional jobs or higher taxes that would result from a more successful business taking over the property.

In this way, local governments have come to use eminent domain as a development tool, says Bullock.

Jeff Finkle, chief executive officer of the International Economic Development Council and Bullock's opponent at the Cato forum, argued that in the modern world, eminent domain is a tool needed to ensure economic development.

Although the debate is often characterized by the dramatic image of the huge developer trying to take the home of a poor defenseless retiree or struggling small business owner, Finkle says that such cases are not the norm, and that often those who seek not to sell their property in such cases do so only for financial gain.

"The vast, overwhelming majority of real estate transactions are marketplace deals, even when eminent domain is contemplated," he said. "Eminent domain is then used to acquire property where there are holdout owners. The vast majority of these holdouts are to achieve a better price, they are not emotional."

Bullock believes that the tide is changing for those fighting against abuse of eminent domain, with courts now often unwilling to simply rubber stamp any eminent domain request made by a government agency, and no longer trusting the agencies to act in the best public interest.

For example, he cited a move last month by the Illinois states Supreme Court to reverse its earlier decision in a case where the owner of an East. St. Louis racetrack petitioned the Southwestern Illinois Development Authority, known as SWIDA, to seize the property of a neighboring auto salvage yard so he could use it to build a parking lot for his racetrack, without first asking the salvage yard owner to sell him the land.

Originally, the court found the use of eminent domain to be proper, but then changed course and denied the seizure, citing a lack of merit.

Michael Dardia, a research fellow at the Public Policy Institute of California and an expert on development issues, told United Press International that there has been a change in judicial attitudes toward government use of eminent domain as a development tool.

He says that courts in the past often worked under the basic assumption that local governments were acting in good faith when they used this power, but that lately state courts have been applying a more critical eye to these cases.

In addition, Dardia argues that there is a conflict of interest for government economic development agencies -- like SWIDA -- that oversee such transfers, because their mission to develop properties with private partners conflicts with their responsibility of legally and ethically overseeing property transfer.

"This is open to abuse," he said adding that a single property owner in a large development scheme is typically viewed as a small obstacle in the path to building. "Here in California, over time, there have been increasing counterweights added to the law for development agencies. The incentive to abuse is clearly there."

In addition, he noted that there is often little a small business or landowner can do to protect himself from such developers without undertaking considerable legal expense.

Finkle believes that in order for cities and localities to increase tax bases and bring businesses into an area, they must use eminent domain to ensure the availability of the immense properties needed to house today's large businesses, warehouses or factories.

"The turnaround time of business to make site selection decisions does not allow time for protracted negotiations," he said.

But according to Bullock, eminent domain it is not required for effective economic development.

"The idea that you cannot have economic development without eminent domain is frankly nonsense," he said. "Development goes on every single day in this country without the use of eminent domain."

He says there are cities and states around the country where eminent domain cannot be used, such as Washington State, where downtown Seattle has undergone some "model urban renewal planning."

"What he (Finkle) ignored is that you cannot have economic development at the expense of constitutional rights," said Bullock. "Would police work in this country be more efficient if we didn't have the Bill of Rights? Yeah, probably it would be."

According to Dardia, there are legitimate uses for eminent domain -- especially in cases where a single property is halting development -- but he believes that such power needs to be kept in check.

"This is a very potent tool to give government, and so you don't want to give it to government without clearly marked boundaries, and also without some sort of oversight authority or some efficient counterweight," he said.

He also believes that both sides on this debate ignore the fundamental unfairness of the laws requiring that the owners be compensated with "fair market value" when their property is taken.

"That is a fine term to use, but it is not always clear what the fair market value is," said Dardia. "There are still some very functional questions that revolve around what is fair market value, and who gets a share of the gains."

Matthew Harrington, an assistant dean at the George Washington University School of Law and an expert in legal history, told UPI that it is important to note that these disagreements have existed over eminent domain almost since the beginning of American jurisprudence.

Harrington says that the Institute for Justice and other organizations are trying to have the courts fix problems that the judicial system has struggled with for more than 200 years.

For instance, Harrington says the 19th Century was marked by a long struggle over whether takings of land should be allowed for public and private purpose. Under the highly contested Mill Acts of the day, a private party could directly petition the courts to transfer unused land for milling use, without the involvement of a government agency.

In addition, he said that the Supreme Court has had many chances to change the interpretation of the Constitution it made in the Berman v. Parker case, and never has.

"The problem with the Institute for Justice position as a historical matter is that it isn't a new problem." said Harrington "What they are trying to do is re-fight battles that have been fought over and over again. History is not on their side."

He said that ultimately, this argument against the use of eminent domain comes down to issues of Constitutional interpretation, with opponents ignoring the fact that the framers understood the issue of land-taking quiet well, and could easily have written the clause to restrict the practice -- if they wanted to.

Harrington believes judicial efforts over the abuse of eminent domain are misguided.

"The problem for me is really a legislative one," he said. "I agree that oftentimes this can be out of control. But legislatures set the rules by which municipalities or other government agencies can use eminent domain. If the problem is with an out-of-control development agency, then go to the legislature and have the problem fixed." 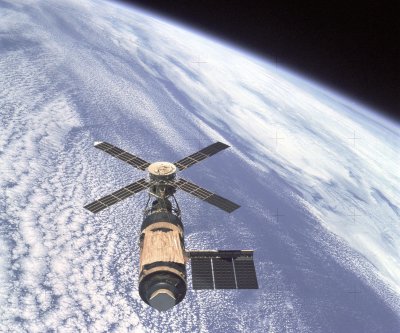 Top News // 1 hour ago
On This Day: Skylab falls to earth
July 11 (UPI) -- On July 11, 1979, Skylab, the United States' first space station, fell to Earth after six years in orbit, scattering tons of debris across the Australian desert.

U.S. News // 11 hours ago
Markets see boost from Gilead coronavirus news
July 10 (UPI) -- The major U.S. stock indexes finished the week on the upswing Friday, spurred in part by a promising study from Gilead on a potential coronavirus treatment.