Commentary: Did Fortuyn have it coming?

LOS ANGELES, May 8 (UPI) -- More than a few members of Europe's political establishment appear to believe that Pim Fortuyn -- the frank anti-immigration Dutch politician who was assassinated Monday, allegedly by a leftist activist -- had it coming.

Although frequently denounced as an "extreme-rightist," Fortuyn was an outspokenly gay man of generally libertarian (and sometimes even libertine) views. By organizing his own grassroots party and winning the Rotterdam municipal elections in March, Fortuyn had electrified the normally somnolent and cozy Dutch political scene, in which power at the national level has changed hands only once since World War II.

By calling for an end to Muslim immigration, the charismatic Fortuyn aroused novel interest among voters in the upcoming national election in the Netherlands, where the dominant political parties had long conspired to prevent open debate over immigration policy. The political upstart, who had enjoyed an outside chance of being elected prime minister on May 15, particularly objected that Muslim immigrants tended to be intolerant of homosexuals like himself. He called for programs to assimilate resident Muslims into the traditional Dutch culture of open-mindedness.

In response to his killing, El Mundo, a leading Spanish paper, cast much of the blame on the victim in convoluted but clearly angry prose: "A criminal response to the incendiary racist calls of these distant heirs of Nazism, introduces a terrible new element in a Europe that is fearful and harassed by demagoguery: that of vengeful violence, which can only engender more violence."

On the rare occasions when a member nation's citizens are allowed to vote on key EU policies, such as the euro common currency, they seldom exhibit much enthusiasm. The Euro-elites' consequent dread of the messy and annoyingly unpredictable clash of ideas and interests that make up a truly democratic politics was sorely on display after Fortuyn was gunned down.

Belgian Foreign Minister Louis Michel implied that the dead man had been just too darn democratic for a modern Euro-democracy: "Democratic parties have to campaign in a very cautious way, and in a balanced and serene way to try to orientate the debate toward democratic values.

The Irish Times editorialized, "It is the very essence of democracy to allow anti-democratic views to be expressed." Apparently, trying to win an election on an anti-immigration plank is inherently "anti-democratic."

Mainstream newspapers and politicians hinted that Fortuyn was a racist, a fascist or even a Nazi. The Irish Times went on: "Nevertheless the murder will serve to highlight the rise of the far right in European politics and may in the long run gain votes for those involved in simplistic, racially-motivated campaigns. Today, on the 57th anniversary of the defeat of fascism, such trends strike a sad note."

Norman Lamont, the former Tory chancellor of the exchequer, wrote, "Britain has been fortunate to avoid the rise of extreme Right-wing, hateful politicians like Jean-Marie Le Pen and Pim Fortuyn, the Dutchman who was murdered in Hilversum."

Aftonbladet, the leading circulation Swedish newspaper, weighed in with, "The brown parties of Europe have a new martyr." Brown was Hitler's color.

In this atmosphere of vicious resentment, British Prime Minister Tony Blair's grudging-sounding admonition against killing anti-immigrationists -- "No matter what feelings political figures arouse, the ballot box is the place to express them" -- seems like the height of liberality.

In George Orwell's novel "1984," one of the few outlets granted Party members from the stultifying regime of political correctness was the periodic Two Minute Hate. The face of Big Brother's mythical enemy Emmanual Goldstein, the official embodiment of evil, would appear on the screen and everybody would shriek at him in fury.

The French final round presidential election campaign was, in effect, a continent-wide Two Week Hate, with anti-immigrationist Jean-Marie Le Pen standing in for Goldstein. Should we be at all surprised that on the very next day, some enraged extremist killed Fortuyn?

U.S. News // 1 hour ago
Watch live: Police give initial findings of deadly shooting involving Alec Baldwin
Oct. 27 (UPI) -- Authorities in New Mexico will give an update Wednesday in the accidental shooting involving actor Alec Baldwin that killed a cinematographer and wounded the director of a western film during production last week.

World News // 2 hours ago
India Supreme Court orders panel to investigate Pegasus spyware scandal
Oct. 27 (UPI) -- India's Supreme Court created an independent committee on Wednesday to investigate accusations that spyware that was sold to the government was used to illegally monitor the phones of lawmakers and activists.

U.S. News // 4 hours ago
More than 4 years later, organizers of extremist Charlottesville rally face civil trial
Oct. 27 (UPI) -- The organizers behind the 2017 "Unite the Right" rally in Charlottesville, Va., are the focus of civil charges on Wednesday that they intentionally planned violence that killed a woman and injured several people. 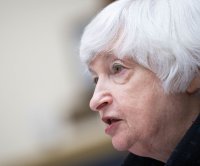