Report: Insider may testify on Zubaydah

SEATTLE, April 2 (UPI) -- A convicted terrorist turned government witness could play a major role in the prosecution of Abu Zubaydah, a reputed top lieutenant in al Qaida who was arrested in Pakistan last week and turned over to the United States.

Federal government sources told the Seattle Times that Ahmed Ressam, who was convicted of trying to smuggle explosives into the United States in 1999, has critical first-hand knowledge of Zubaydah's alleged role as a manager of the al Qaida terrorist training camps in Afghanistan.

In an article published Tuesday, the Times said Ressam appears to be the only al Qaida insider available to the United States who can back up its assertions that Zubaydah is a high-ranking member of Osama bin Laden's terror network.

"This makes Ressam's testimony that much more important," a federal source told the newspaper, speaking on condition of anonymity. "Zubaydah is a big catch, and it is likely Ressam will play a critical role in any prosecution."

"Pakistani officials led a series of raids into suspect extremist hideouts in the early morning hours of March 28th. This individual was captured in one of the raids in the town of Faisalabad, along with dozens of Arab and Pakistani militants," Fleischer said. "U.S. officers supported this operation, but the raids were both led and carried out by Pakistani authorities.

"The individual we believe to be Abu Zubaydah was found at one of the locations originally targeted in the Pakistani raids. He was shot several times as he attempted to escape the raided compound. He is currently receiving medical attention. For security reasons, we are not going to discuss his location. He will be interrogated about his knowledge of ongoing plans to conduct terrorist activities," Fleischer said.

Ressam was convicted in Los Angeles last year of attempting to drive into Washington state from Canada with a cache of bomb-making materials stashed in a wheel well of his rental car. Federal officials believe Ressam was part of a Montreal-based cell of Algerian terrorists who were plotting to set off a bomb during the millennium New Year's festivities, probably at Los Angeles International Airport.

The Times said Ressam, who is being held in the Seattle area, has given investigators extensive information about Zubaydah and, under terms of a deal for leniency he has reached with the government, has agreed to testify in any future terrorism trials that may come up.

Ressam's scheduled sentencing on Friday was delayed for a year so he can fulfill his obligations. The Times said he was expected to be on the witness lists against accused Bin Laden aide Abu Doha, and Zacarias Moussaoui, the so-called "20th hijacker" from the Sept. 11 attacks on the Pentagon and World Trade Center.

Michael Sheehan, a former State Department director of counter-terrorism, told the Times recently that although some members of the intelligence community had seen Zubaydah as a mid-level operative, his reputation has grown in recent months.

"I see him as being more sinister," Sheehan said. "There is evidence that he is a planner and a manager as well. I think he's a major player."

In testimony during the New York trial of his co-conspirator, Mohktar Haouari, Ressam stated that in 1998, he had stayed for about a month at a safe house operated by Zubaydah in Pakistan before entering Afghanistan where he underwent terrorist training at an al Qaida camp.

Almost a year later, Zubaydah asked Ressam to send him four Canadian passports to be used by other terrorists in order "to carry out operations in the U.S."

Ressam testified, however, that he was not able to procure the passports.

Ressam also acknowledged that Zubaydah was not one to double-cross without taking the risk of being killed.

Top News // 2 hours ago
UPI Almanac for Thursday, July 2, 2020
On July 2, 1917, Greece declared war on the Central Powers, joining World War I on the side of Britain, France, Russia and Italy.

Top News // 2 hours ago
On This Day: Greece joins World War I
July 2 (UPI) -- On July 2, 1917, Greece declared war on the Central Powers, joining World War I on the side of Britain, France, Russia and Italy. 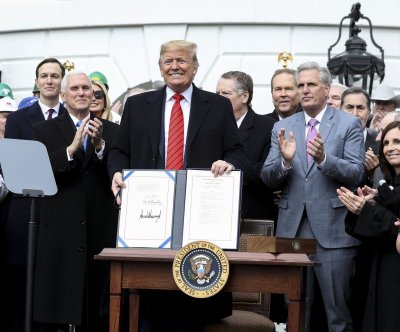