The Racketeering Influenced and Corrupt Organizations Act, known as the RICO statute, is usually used in prosecutions of organized-crime cases. By filing that kind of suit, the lawyers are calling the Catholic Church a criminal enterprise.

It is the third allegation against O'Connell by seminarians at St. Thomas Aquinas Preparatory Seminary in Hannibal, Mo., made as a result of his 25 years as an instructor and teacher there.

O'Connell resigned March 8 as bishop of the Palm Beach Diocese after a newspaper article detailed sec-abuse allegations made by Christopher Dixon of St. Louis. Dixon was paid $125,000 by the Jefferson City, Mo., Diocese in 1996.

Another suit was filed Monday in Missouri alleging similar acts by O'Connell who also as served as bishop in Knoxville, Tenn.

The new suit was filed in Hannibal by attorneys Jeff Anderson and Pat Noaker of St. Paul, Minn., on behalf of an unidentified 47-year-old Minnesota man. It names O'Connell and the dioceses of Jefferson City; Knoxville; and Palm Beach, Fla.

"The notion of labeling the church as a criminal enterprise is something people are very reluctant to do," said Bob Sherman, an attorney for the Boston firm of Greenburg and Traurig, which has handled numerous sex abuse cases involving the Catholic Church.

"The fact that they're using it in this case is indicative of the frustration in the country today as the situation with the church and sex abuse cases gets worse and worse," he said.

The RICO statute allows triple damage awards and carries no statute of limitations.

At least three RICO suits have been filed against the Catholic Church in sex abuse cases, but none has reached the trial stage. One in New Jersey was settled out of court, one was thrown out of court and another is still pending.

The archdiocese of Boston has acknowledged playing millions of dollars in settlements for almost 90 priests but so far no RICO suits have been filed there.

Pope John Paul II denounced the "grave scandal" involving priests implicated in sex cases. He said in his annual pre-Easter message Thursday they had betrayed their vows and succumbed to evil.

World News // 20 minutes ago
At least 8 killed by gunman in shooting spree at Russia's Perm State University
Sept. 20 (UPI) -- At least eight people were killed and more than two dozen were injured at a university campus in central Russia on Monday after authorities say a gunman opened fire and targeted victims at random. 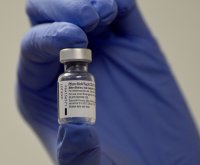 U.S. News // 16 hours ago
FBI: Human remains found in Wyoming 'consistent' with description of Petito
Sept. 19 (UPI) -- Human remains have been found Sunday at a national forest in Wyoming where authorities were searching for a Florida woman who went missing during a cross-country road trip with her fiancé who returned home without her.