Ailing back forces No. 1 seed Caroline Wozniacki out at Strasbourg 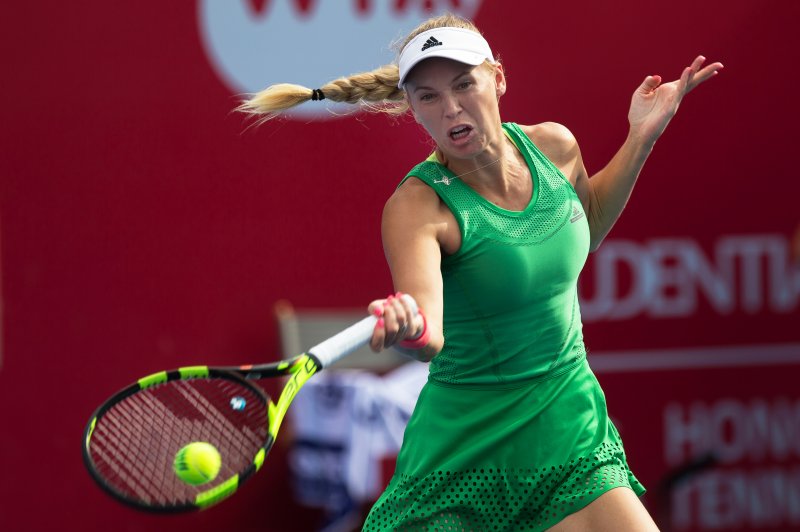 A sore back forced Caroline Wozniacki, the top seed, out at Strasbourg. File photo by JEROME FAVRE/UPI

Top-seeded Caroline Wozniacki retired due to a balky back after the completion of one set in her opening-round match against American Shelby Rogers on Monday in the Internationaux de Strasbourg in France.

Rogers, who is ranked 55th in the world, won the opening set 7-6 (8) and claimed the first game of the second after the Dane double-faulted. Wozniacki then elected to end the match with the French Open on the horizon.

"I came back and had my chances to win that first set, and then I started feeling my back," Wozniacki said. "I felt it kind of in the middle of the first set. At this point, I think it's important for me to try and get ready for the French Open and be 100 percent for that. I'm disappointed that not to be here anymore -- it's my first time here and I love this city, and I hope I can come back."

Rogers appreciated the fight Wozniacki displayed to compete in the first set, but ultimately understood her decision to call it a match.

"We definitely had a battle in the first set," Rogers said. "I came out playing very well, and then she, as she does, fights back and doesn't miss many balls and gets her way back into the match. Best of luck (to her) on her recovery, I know she wants to get ready for Paris. I think that's important to her now and looking forward to seeing her there."

Wozniacki wasn't the only high-seeded player to be bounced from the tournament as Italian Camila Giorgi overcame dropping the first set to post a 1-6, 6-1, 6-1 triumph over second-seeded Russian Elena Vesnina.

"I think I started nervously -- maybe not nervous, per se, but I wasn't playing my game," Giorgi said after recording 29 winners to just eight unforced errors. "I started to do that and found my rhythm. From there, it was good."

Giorgi advances to face Australian Ashleigh Barty, who knocked out lucky loser Cagla Buyukakcay of Turkey in the first round on Sunday.

Fifth-seeded Caroline Garcia of France and seventh-seeded Daria Gavrilova of Australia breezed into the second round with convincing victories. Garcia posted a 6-3, 6-4 win over American Jennifer Brady and Gavrilova cruised to a 6-2, 6-3 triumph over American Louisa Chirico.

Eighth-seeded Peng Shuai had a tougher time of it with a 3-6, 7-5, 6-1 victory over Frenchwoman Alize Cornet.