Top-seeded Elina Svitolina of Ukraine overcame a slow start in the first set and advanced to the final of the Taiwan Open with a 6-3, 6-2 victory over Luxembourg's Many Minella on Saturday.

After needing nearly two hours and saving four match points in her quarterfinal match against Tunisian qualifier Ons Jabeur Friday, Svitolina appeared on track for another lengthy match. She fell behind Minella 3-1 in the first set before cruising to victory.

Svitolina won the next five games and easily won the second set by breaking Minella twice.

"I was trying to be aggressive on the return, because she has a big serve," Svitolina said. "I wanted to put more pressure on her, and I think this worked really well.

"She had a good start, but I was fine with it. I was just focusing on my strategy. I stayed quite solid."

Svitolina advanced to her first final of the year and will face China's Peng Shuai. The unseeded Shuai eliminated Lucie Safarova of Czech Republic, 6-4, 6-2.

The 30-year-old Peng is ranked No. 71 but is returning from a long layoff due to major back surgery after the 2015 French Open. Late last year, she claimed her first WTA title in Tianjin.

"After the surgery, I needed to do a lot of training and practicing," Peng said. "Something I could do in the past, maybe I could not do it today after the surgery.

"I need to take gradual steps to improve myself after the surgery. I think more important for me is to stay healthy and fit, otherwise I cannot continue my professional career."

Shuai advanced to the semifinals by stunning No. 2 seed Samantha Stosur of Australia in the quarterfinals. Shuai also knocked off No. 5 seed Katerina Siniakova of the Czech Republic before eliminating Stosur.

"She's ranked No. 71 now, but I know she was much higher before she was injured," Svitolina said. "She's playing really confident, and she's also in the final in the same situation as me." 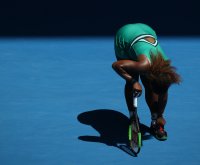