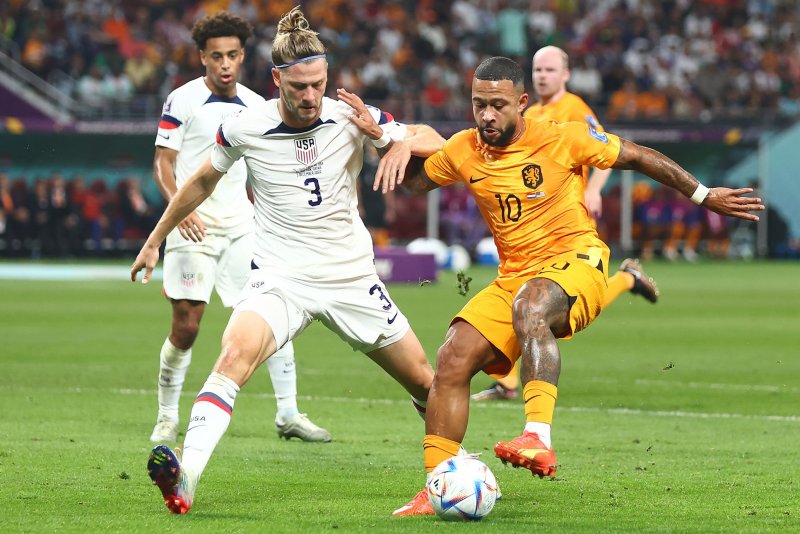 Dec. 3 (UPI) -- Memphis Depay and Daley Blind each scored early goals to lead the Netherlands to a Round of 16 win over the United States at the 2022 World Cup on Saturday at Khalifa International Stadium in Al Rayyan, Qatar.

American striker Haji Wright also scored in the 76th minute of the 3-1 loss at Khalifa International Stadium. The Americans failed to advance past the Round of 16 for the ninth time in their last 10 chances.

"This is a difficult one to handle," American manager Gregg Berhalter told Fox. "It is such a good group of guys and a close group of guys. We came up short, but not for a lack of trying or a lack of effort.

"I'm really proud, when you think about how this group came together of the last three and a half years. It's special to see."

Depay drew first blood in the 10th minute. Blind doubled the lead in first-half stoppage time. Right wing Denzel Dumfries, who assisted the first two scores, found the net for himself in the 81st minute.

The Netherlands clinched a spot in the quarterfinals with the victory. They will face Argentina or Australia for a spot in the semifinals.

The Americans nearly stole a goal early on when Christian Pulisc stayed onside for a point-blank range shot in the 3rd minute. Dutch keeper Andries Noppert used his left foot to deny the attempt and keep the game scoreless.

Depay then gave the Netherlands the advantage in the 10th minute.

Dumfries received a ball on the right flank, just above the box, to start that sequence. He then fired a cross through the box. Depay darted into the area and used his right boot to fit a sizzling shot inside the left post, just out of the reach of American goalie Matt Turner.

The Americans continued to threaten throughout the first half, but couldn't equalize. Blind then doubled the Netherlands lead in first-half stoppage time.

Dumfries received the ball deep in the right side of the box during that sequence. He then dribbled to the end line and fired a pass toward the top of the box.

Blind used a delayed run to navigate through the defense. He then used a first-touch shot to burry the ball into the left side of the net.

The Americans made several offensively-minded substitutions and continued to threaten in the second half. The Netherlands also kept the Americans honest on the counterattack. Wright finally cut into the lead in the 76th minute.

Pulisic hovered on the right flank, about 30 yards from the goal, to spark that score. He received the ball and continued a delayed run into the box before he slid a pass in front of the net.

Wright ran in to receive the feed and used a right-booted flick to direct the ball into the air. It then flew over a crowd of defenders and landed in the left side of the net.

Dumfries then netted the clinching score less than five minutes later. Blind received the ball on the left flank to set up that score. He then curled a cross over the box toward the far post.

Dumfries used his left boot for a one-touch volley into the far-post netting,

The Netherlands will battle Argentina or Australia at 2 p.m. EST Friday at Lusail Stadium in Lusail.

A Morocco fan supports his team while wearing a costume during the 2022 FIFA World Cup Semi-Final match between Morocco and France at Al Bayt Stadium in Al Khor, Qatar, on December 14, 2022. Photo by Chris Brunskill/UPI | License Photo

U.S. News // 4 hours ago
Death row inmate's attorneys called sentence 'justifiable lynching' in 1999 hearing
Feb. 5 (UPI) -- Attorneys for a Black death row inmate in Texas are seeking that his sentence be relieved in light of evidence detailing racists attitudes and actions from his previous counsel and the all-White jury that sentenced him.

U.S. News // 6 hours ago
NYPD seeking suspect who shot off-duty officer in the head in robbery
Feb. 5 (UPI) -- A New York Police Department officer is in critical condition after being shot in the head during a robbery attempt as he attempted to buy a vehicle from Facebook Marketplace.

World News // 6 hours ago
Woman dies, at least 41 others rescued after migrant boat sinks off Greece
Feb. 5 (UPI) -- A woman died and dozens of others were rescued after a boat carrying migrants sunk Sunday off the coast of the Greek island Leros.

U.S. News // 7 hours ago
No jackpot winners in Saturday's Powerball drawing, prize reaches $747 million
Feb. 5 (UPI) -- Nobody claimed the Powerball jackpot for the 33rd time in a row on Saturday, pushing the grand prize to $747 million ahead of Monday's drawing.