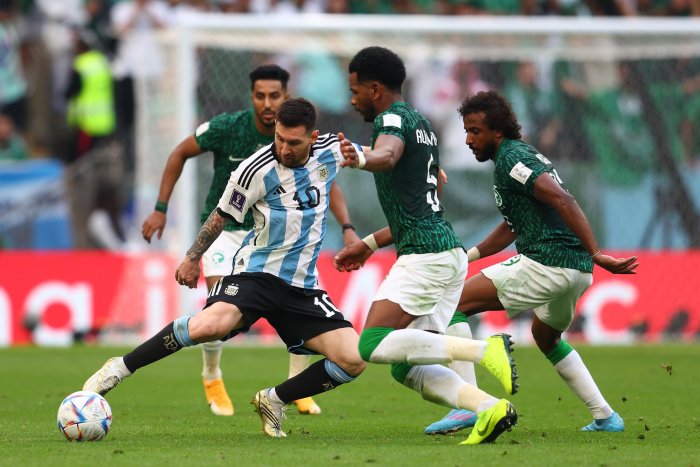 Nov. 22 (UPI) -- Saudi Arabia scored twice in the second half to overcome a one-goal deficit and rally past Lionel Messi and Argentina for an upset in a Group C World Cup opener Tuesday in Lusail, Qatar.

Argentina is ranked No. 3 in the world and among the Top 3 favorites to win the tournament. Saudi Arabia is ranked No. 51 and entered the match with just three victories in their previous 16 World Cup appearances.

Argentina now sits at the bottom of Group C, while Saudi Arabia leads the group with three points. Mexico and Poland will meet in another Group C opener at 11 a.m. EST Tuesday in Doha at Qatar 2022.

"This loss hurts a lot because we wanted to start the World Cup with a win," Argentine striker Lautaro Martinez said in his post-match interview. ""But it's happened and now we have to train and think forward."

Saudi defender Ali Al-Bulayhi fouled Argentine midfielder Leandro Paredes in the box in the eighth minute to spark the first score of the game. Messi then stepped up to the penalty spot and flicked a shot into the left side of the net to beat Saudi goalie Mohammed Al-Owais.

Messi had another score taken off the board due to an offside call in the 22nd minute. Another two Argentine scores also were disallowed due to off-side calls in the first half.

Messi turned the ball over in the 48th minute, which led to the equalizer. Center midfielder Abdulelah Al-Malki recovered the loose ball and chipped a long ball toward the box. Winger Feras-Al-Buraikan touched the ball ahead for Al-Shehri, who tapped it around a group of defenders and ripped a shot just inside the far post.

Saudi Arabia added the go-ahead score in the 53rd minute after the Argentine defense deflected an initial attempt. Al-Dawsari brought down the deflection while inside the box. He then weaved between defenders and unleashed a right-footed blast past diving Argentine keeper Emiliano Martinez, who got a finger on the shot, but couldn't keep it out of the net.

Argentina continued to threaten down the stretch, but couldn't net an equalizer.

They now look forward to their second Group C match against Mexico at 2 p.m. Saturday in Lusail. The Argentines will face Poland in their final group stage match at 2 p.m. Nov. 30 in Doha.

Saudi Arabia will face Poland on Saturday in Al-Rayyan. They will meet Mexico Wednesday in Lusail.

Pedro Miguel of Qatar (L) moves the ball as Romario Ibarra of Ecuador defends during the 2022 FIFA World Cup Group A match at the Al Bayt Stadium in Doha, Qatar, on November 20, 2022. Ecuador beat Qatar 2-0 in the opening match. Photo by Chris Brunskill/UPI | License Photo

U.S. News // 6 hours ago
Storm with high winds, colder air to blast across Midwest, Northeast
More than 125 million people from the Midwest to the Northeast could face disruptive wind gusts from a powerful storm system from Tuesday to Wednesday.

U.S. News // 6 hours ago
Severe weather to threaten 25 million from Texas to Illinois
Approximately 25 million people in the south-central United States will be at risk for severe thunderstorms on Tuesday alone.
Advertisement