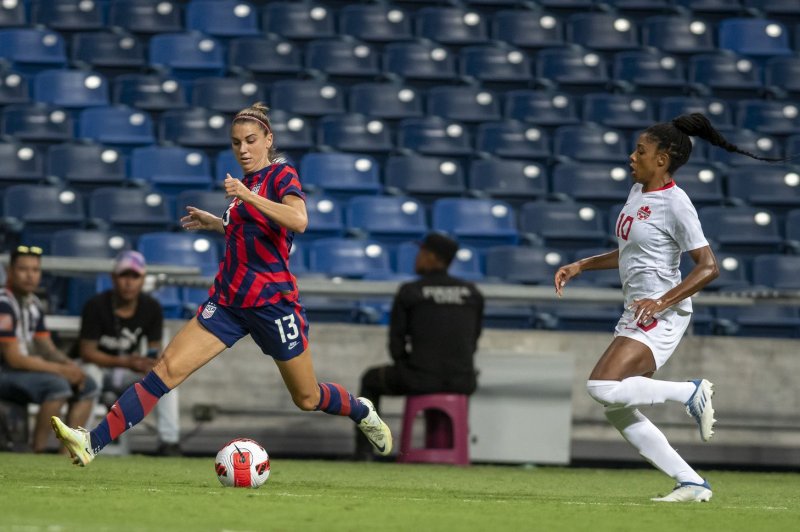 Forward Alex Morgan (L) beat goalie Kailen Sheridan in the 78th minute to lead the United States Women's National Team to a win over Canada in the CONCACAF W Championship on Monday in Guadalupe, Mexico. Photo by Miguel Sierra/EPA-EFE

Morgan's 78th minute score was just enough to lead the Americans to the 1-0 shutout Monday at Estadio BBVA in Guadalupe, Mexico.

"We worked on a lot of things this week: how to break them down and how to play quick," Morgan said in an on-field interview. "It kind of all started from a throw-in. ... I just finished it off."

The Americans and Canadians each came close to first-blood scores early on in the first half. Sheridan blocked two attempts from Mallory Pugh. The American forward hit another shot just wide. Morgan and midfielder Lindsey Horan also watched attempts sail just wide of the post.

Young forward Sophia Smith nearly snuck in a near-post attempt and also was denied by Sheridan on a close-range shot in the first half.

Forward Nichelle Prince threatened several times for the Canadians, but came up empty. Several more close calls came to start the second half.

Morgan sent a pass up to right wing Rose Lavelle to spark the decisive penalty. Lavelle ran into the box to track down the feed, but was brought down by Canadian defender Allysha Chapman.

Morgan then stepped up to the penalty spot and ripped a left-footed shot into the right side of the net, as Sheridan jumped to the opposite side of the goal.

Both teams were denied on additional chances down the stretch. The final whistle then prompted a trophy celebration for the Americans at midfield.

The U.S. women also shut out Costa Rica 3-0 in the semifinals. They haven't allowed a goal in their last eight matches.

The 2024 Summer Games will start July 26, 2024 in Paris. Canada claimed the last gold medal with a title game win over Sweden in the 2020 Summer Games. The Canadians beat the Americans in the semifinals of that tournament.

The Americans, who won the last two World Cup titles, beat Jamaica July 7 to clinch a spot in the 2023 World Cup. They will start their quest for a third-consecutive and fifth overall crown next July at that tournament, which will be hosted in Australia and New Zealand.

The Americans own an overall combined record of 60-1-1 in World Cup and Olympic qualifiers. They will face Nigeria in a friendly at 1 p.m. EDT Sept. 3 at Children's Mercy Park in Kansas City, Kan.

World News // 24 minutes ago
London offers all children polio boosters after more virus found in city sewers
Aug. 10 (UPI) -- Health officials in London are offering polio vaccine boosters to all children between the ages of one and nine after more polio virus was found in the city's sewers.

Health News // 45 minutes ago
Study: Visit friends, take a walk or, better yet, read to lower dementia risk
Aug. 10 (UPI) -- A new study suggests that leisure activities like making crafts, playing sports or volunteering are linked to a reduced risk of dementia.

World News // 1 hour ago
Speaker Nancy Pelosi: 'We will not allow China to isolate Taiwan'
Aug. 10 (UPI) -- U.S. House Speaker Nancy Pelosi, D-Calif., said during a Capitol press conference Wednesday that she went to Taiwan during her Asian-Pacific trip to "salute a thriving democracy."

Health News // 2 hours ago
Poll: Most older, vaccinated Americans will get updated booster shots
Most older U.S. adults are prepared to roll up their sleeves to get an updated COVID-19 booster shot once one becomes available, a new poll shows.

Odd News // 2 hours ago
Overturned truck spills Bud Light onto Kentucky highway
Aug. 10 (UPI) -- Hundreds of beer cans spilled onto a highway median when a truck carrying a load of Bud Light overturned on a ramp.

Odd News // 2 hours ago
Maryland man's second lottery jackpot comes more than a decade later
Aug. 10 (UPI) -- A Maryland Lottery player said his persistence paid off when he scored a $50,000 jackpot more than a decade after winning a $25,000 prize.

U.S. News // 3 hours ago
Pilot, four others escape injury as plane hits vehicle, crash lands on freeway
Aug. 10 (UPI) -- A small plane in southern California crash-landed on a Riverside County freeway before bursting into flames on Tuesday afternoon but there were no reported injuries.
Advertisement