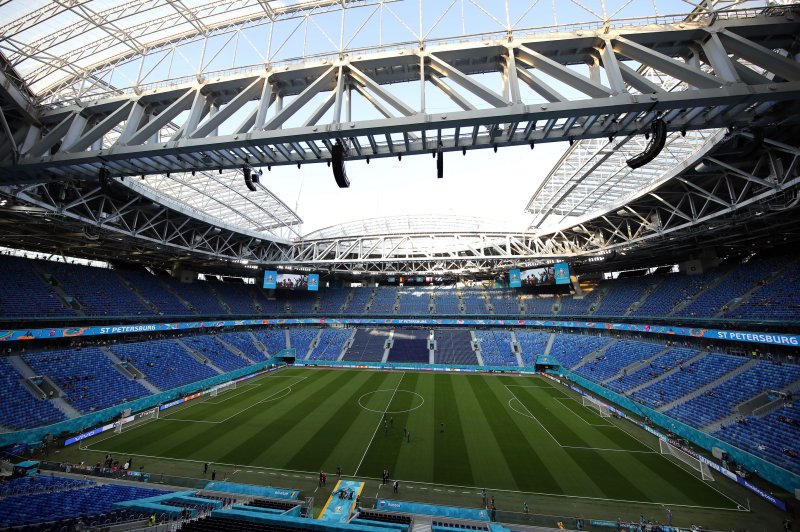 Krestovsky Stadium is seen in St. Petersburg, Russia. The venue was supposed to host the UEFA Champions League title game in May, but will no longer be the site of the match after Russia moved troops into regions in eastern Ukraine. File Photo by Anton Vaganov/EPA-EFE/Pool

St. Petersburg was scheduled to host the final on May 28 at Krestovsky Stadium, where it held the World Cup final in 2018. The COVID-19 pandemic had led Russia to postpone hosting the UEFA title game last year.

The British government and European Union have said they're preparing sanctions against Moscow after Russian President Vladimir Putin's declaration Monday that two separatist-held regions in eastern Ukraine are independent -- and then sent Russian troops to the regions.

The West has been warning Moscow for weeks against invading Ukraine, and soccer authorities said Tuesday that the recent developments have caused a problem with the tournament plans.

"[There is] no chance of holding football tournaments in a Russia that invades sovereign countries," British Prime Minister Boris Johnson told the House of Commons Tuesday, according to the BBC.

"I have serious concerns about the sporting events due to be held in Russia," Dorries said in a tweet. "We won't allow President Putin to exploit events on the world stage to legitimize his illegal invasion of Ukraine."

In comments to the House of Commons, Johnson also announced sanctions against five Russian banks -- Rossiya, IS Bank, General Bank, Promsvyazbank and the Black Sea Bank -- and three individuals that include Gennady Timchenko, Boris Rotenberg and Igor Rotenberg.

World News // 13 hours ago
Woman dies, at least 41 others rescued after migrant boat sinks off Greece
Feb. 5 (UPI) -- A woman died and dozens of others were rescued after a boat carrying migrants sunk Sunday off the coast of the Greek island Leros.
Advertisement