Maryland's Ben Bender was the No. 1 overall pick in the 2022 MLS SuperDraft. Photo by Maddie Kyler/Maryland Terrapins

"I've heard the fans are itching to see soccer in Charlotte," Bender said on the broadcast. "I can't wait to get started. I know the futbol down there will be a good brand. I just want to be a part of that."

FC Dallas picked three times in the first round. They also selected St. John's defender Lucas Bartlett at No. 6 overall and Oregon State forward Tsiki Ntsabeleng at No. 28 overall.

The Earthquakes picked Stanford forward Ousseni Bouda at No. 8 and Clemson defender Oskar Agren at No. 13. The Rapids selected Notre Dame midfielder Mohamed Omar at No. 23 and Northern Illinois defender Anthony Markanich at No. 26.

Another 28 players were selected in the second round of the MLS SuperDraft. The third round features 33 selections.

RELATED Lionel Messi 'in isolation' after testing positive for COVID-19 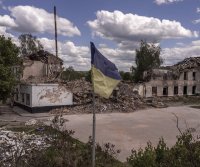 U.S. News // 5 hours ago
May in the Mile High City: Heavy snowfall forecast for Denver area
May 19 (UPI) -- Winter storm watches and warnings were in effect Thursday across a large section of Colorado and northward into Wyoming.

U.S. News // 6 hours ago
Veeve to deploy "Smart Carts" at Albertsons grocery stores later this year
May 19 (UPI) -- Seattle-based start-up Veeve and grocery chain Albertsons announced a deal Thursday to deploy Veeve Smart Carts in "a few dozen" of its stores by the end of the year.
Advertisement