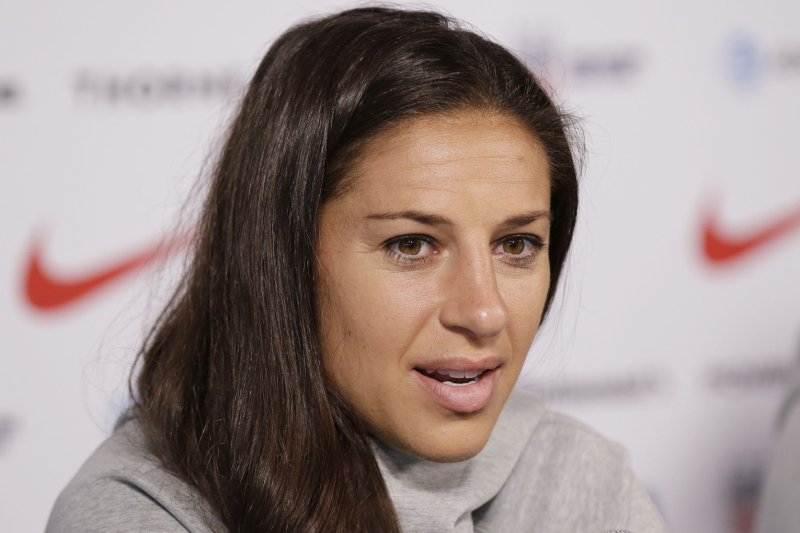 "It has been an honor," Lloyd told the crowd after the game. "I have been absolutely grateful for every opportunity. I hope that you know I gave it everything I had for every single one of you."

Lloyd was removed from the game in the 65th minute. Her eyes filled with tears, she took her cleats off on the field, hugged every teammate and saluted the crowd as she received a standing ovation. She then removed her jersey to reveal another jersey underneath, which featured her married name: Hollins.

Lloyd, 39, announced her retirement in August. The Delran Township, N.J., native made her senior national team debut in 2005. Lloyd appeared in 316 games for the U.S. She scored 134 goals, won the World Cup twice, and claimed two gold medals and a bronze at the Summer Games.

She is best known for her hat trick against Japan in the 2012 World Cup Final. Lloyd scored all three goals within the first 16 minutes of the title-clincher.

A crowd of 18,115 attended Tuesday's triumph. Horan started the scoring in the ninth minute.

Forward Sophia Smith dribbled down to the right end line and slipped a pass back into the box. Horan ran onto the feed and took a left-footed shot. The attempt deflected off a defender and found the net.

The Americans doubled the lead in the final minute of the first half. Midfielder Catarina Macario took a corner kick from the left side to spark that score. Midfielder Andi Sullivan flicked the kick back toward the net. The header then deflected off Cho and bounced into the net.

Morgan increased the lead to three goals in the 69th minute. Rapinoe received a pass on the left flank in transition to start that play. She took a few dribbles and used the outside of her right boot to curl a pass through three defenders and into the box for Morgan.

The star striker, who entered the game for Lloyd, used her first touch to fire a shot through the legs of South Korea keeper Kim Jung-mi and into the net.

Rapinoe added another goal in the 85th minute.

Lavelle did a give-and-go pass sequence on the right flank and slid a pass to Rapinoe on her left. Rapinoe sent a pass back toward the far post, but the ball was deflected.

Another U.S. shot was deflected and bounced out to Emily Sonnett. The right back exchanged passes with Horan before she fired a pass into the middle of the box. Rapinoe ran to the area and ripped a first-touch shot into the upper portion of the net.

Morgan assisted Lavelle minutes later to give the Americans a 5-0 edge. The U.S. forward jumped through traffic and smacked a loose ball into the box for Lavelle during that play. Lavelle chested the ball ahead and sent a shot into the far-post netting.

Lynn Williams scored the Americans final goal in stoppage time. Tobin Heath dribbled through traffic about 30 yards from the net to spark that score. She then slid a pass ahead for Williams, who tapped a left-footed roller past Jung-mi.

No additional games are listed on the schedule for the U.S. women.

Lloyd also wrote a farewell for her fans on The Players' Tribune website. The article was published early Tuesday. Lloyd wrote about her critics and adversity she fought through in her soccer career.

"I was not supposed to be who I became," Lloyd wrote. "It wasn't in the script. And that's what made it all so sweet."

Lloyd returns to the field to play her final regular-season games for NJ/NY Gotham FC on Thursday and Sunday in the National Women's Soccer League. Gotham FC also is in the playoff race, which could be Lloyd's final series of games as a professional.

"Thank you to everybody who has played a role in my journey," Lloyd said Tuesday. "I can't thank you enough. That is it. I'm signing off. You will not see me on the field, but you best believe I will be around helping this game grow."

Science News // 2 hours ago
Study: People choose to learn about health, world news based on feelings
Dec. 3 (UPI) -- People choose whether to seek or avoid information about their health, finances and personal traits based on how they think it will make them feel and how useful it is, a Nature Communications study found.

Odd News // 2 hours ago
Snowstorm leads to impromptu sleepover for 31 people at Denmark Ikea
Dec. 3 (UPI) -- Customers and employees at an Ikea store in Denmark spent the night on the furniture store's display beds after they became stranded by a snowstorm.

Odd News // 2 hours ago
Cash, checks found inside wall of Osteen mega-church 7 years after break-in
Dec. 3 (UPI) -- A plumber doing work at Joel Osteen's mega-church in Houston found a large amount of money hidden inside a wall seven years after $600,000 was reported stolen during a break-in.