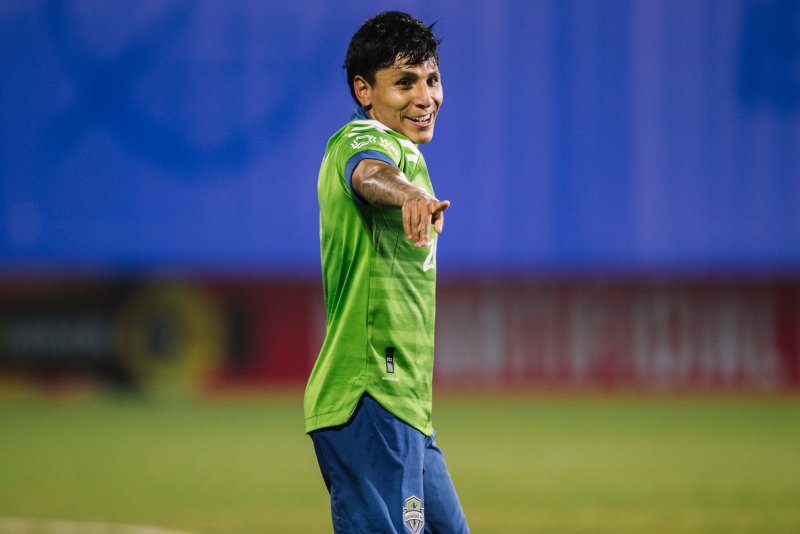 Seattle Sounders forward Raul Ruidiaz scored a second-half equalizer to help his team rally for a comeback win over Minnesota United in the 2020 Western Conference Final on Monday in Seattle. Photo courtesy of MLS/Matthew Stith and Eric Goncalves

Dec. 8 (UPI) -- Gustav Svensson scored in the third minute of stoppage time to lead the defending champion Seattle Sounders to a dramatic comeback in the Western Conference Final and into the 2020 MLS title game.

The Sounders take on the Columbus Crew in MLS Cup final on Saturday in Columbus, Ohio, after the 3-2 victory over Minnesota United on Monday in Seattle.

"In our Sounders history, this is going to go down as one of the best games ever," Sounders manager Brian Schmetzer told reporters. "We won a final, we won an MLS Cup last year, but this has to rank right up there. This was a great win."

Seattle trailed 2-0 midway through the second half before Will Bruin, Raul Ruidiaz and Svensson scored three unanswered goals in the comeback victory.

Minnesota forward Emanuel Reynoso drew first blood on a free kick in the 29th minute. Reynoso stepped up to the mark and attempted a shot from about 25 yards out during the sequence. The kick sailed over a wall of defenders and tucked into the bottom right corner of the net.

United held the narrow lead through the halftime whistle and for the first 22 minutes of the second half before they doubled their advantage. Reynoso took another free kick to spark that score.

The United forward sent the kick in from the left side and found the head of fullback Bakaye Dibassy. Dibassy flicked a shot into the far-post netting to beat Sounders keeper Stefan Frei for a second time.

Then the Sounders started their rally. Ruidiaz attempted a shot in the 75th minute, but the kick was blocked by the defense.

Bruin then collected the rebound before he buried a shot into the left side of the goal to ruin United keeper Dayne St. Clair's clean sheet.

Ruidiaz then scored an equalizer about 14 minutes later. The Sounders forward collected a loose ball during a corner kick on that play. Ruidiaz used his first touch to sneak a shot into the near-post netting for the 89th-minute score.

The Sounders got the game-winning goal off a corner kick in stoppage time. Sounders forward Nicolas Lodeiro took the kick from the right corner to spark that score.

The left-to-right inswinger fell into the box before Svensson jumped up and put his head on the ball. Svensson's flick then landed in the left side of the goal for a dramatic game-winner.

"You could kind of feel the momentum tilting a little bit," Bruin said. "We knew if we got one, we were going to get two, and Gustav capped it off with a third."

The Sounders face the Crew in the 2020 MLS Cup final at 8 p.m. EST on Sunday in Columbus.

World News // 12 minutes ago
Three men rescued from tanker's rudder after 11 days at sea
Nov. 29 (UPI) -- The Spanish Coast guard has rescued three stowaways found sitting on the rudder of a ship after an 11-day journey from Nigeria, Spanish authorities confirmed on Tuesday.

U.S. News // 14 minutes ago
Severe weather to threaten 40M from Texas to Illinois, Indiana
As a potent, multifaceted storm rolls out from the Rockies, severe weather ranging from high winds to tornadoes will be possible from the northwestern Gulf coast to the Mississippi Valley, meteorologists warn.

U.S. News // 1 hour ago
U.S. gets tough on methane with new proposals on oil and gas
Nov. 29 (UPI) -- An Interior Department proposal on methane follows dire warnings of the threat from the harmful greenhouse gas by former U.S. Vice President Al Gore.