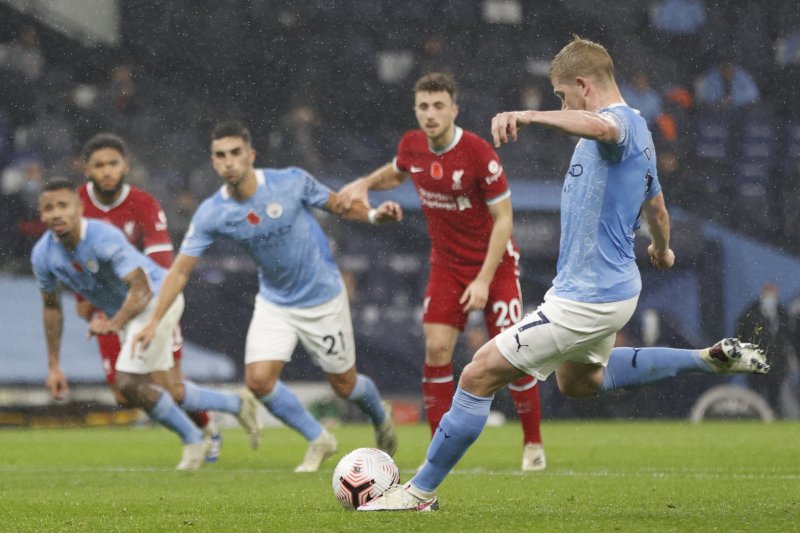 Reds striker Mohamed Salah made a 13th-minute penalty kick before Gabriel Jesus netted an equalizer in the 31st minute on Sunday at Etihad Stadium in Manchester, England.

"We have to win all the games we play here [Etihad Stadium]," Jesus told reporters after the 1-1 draw. "We have to control more, play more, attack like we have in the past and try to score our chances.

"The result is maybe not good for us, but good for them [Liverpool], but we have to keep fighting to the end because there are a lot of games to play."

De Bruyne went wide left on his penalty kick attempt in the 42nd minute. Neither the Sky Blues nor the Reds found the back of the net in the second half.

Liverpool is now in third place in the Premier League standings. Manchester City sits in 10th place after the draw. Leicester City leads the standings at 6-2 on the season. Tottenham Hotspur sits in second place.

"We are always hungry for more," Reds defender Andy Robertson told LiverpoolFC.com. "As footballers, we are always a bit greedy for a little bit more.

"But look, we have to be happy. I think when we started getting some injuries and lost a couple of players with COVID-19 and stuff, everyone expected the wheels to fall off.

"But we've managed to steady the ship a little bit and pick up some great results, especially in Europe."

Reds striker Sadio Mane earned Liverpool's penalty attempt after he was taken down in the box by Sky Blues right back Kyle Walker.

Salah then sprinted up to the penalty spot and struck the ball with his left foot. He sent the shot into the upper left corner of the net to beat Manchester City keeper Ederson.

Both defenses held up for the majority of the half before De Bruyne set up the equalizer. The Sky Blues midfielder received a pass at the top of the Liverpool box during that sequence.

De Bruyne then turned and fired a pass into the box for Jesus. The Brazilian striker flicked the ball around a defender before he finished with a left-footed shot past Reds keeper Alisson.

De Bruyne also helped to prompt the Sky Blues penalty attempt late in the first half. He dribbled down the right flank before he fired a cross through the box, but the feed struck Reds fullback Joe Gomez in the arm for a handball.

De Bruyne then stepped up to the penalty mark and blasted a right-footed attempt, but the shot sliced to the left of the left post.

Ederson went on to block a Liverpool attack in the 44th minute to secure the halftime deadlock. Both goalkeepers and defenses held up down the stretch to secure a point apiece for each Premier League squad.

"After the penalty, we played much better and equalized," Manchester City manager Pep Guardiola said. "It was a tight game. Not many chances for both sides.

"Of course, every team wants three points. One point is one point. We have played 12 games and lost once this season. Maybe I am happier than ever. We conceded a penalty again, hopefully we learn.