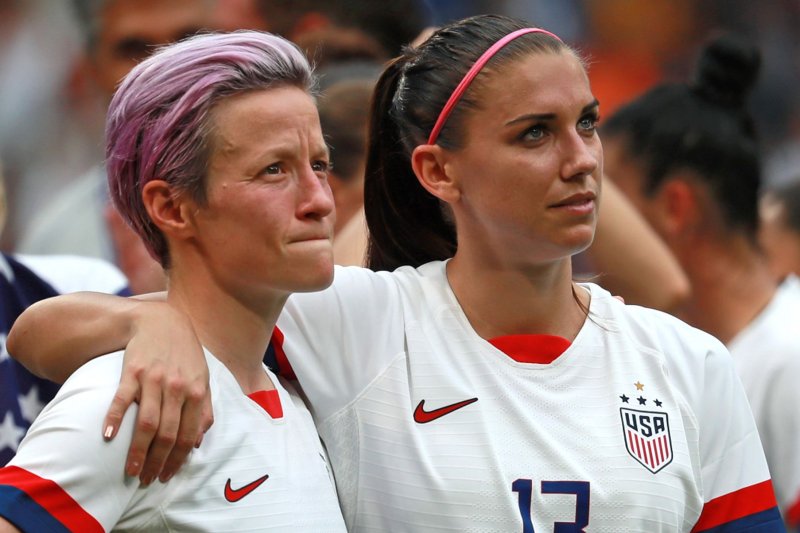 The U.S. Soccer Federation argues that Megan Rapinoe (L) and Alex Morgan were among four players who each earned more money than the highest-paid men's national team player in four of six years since 2014. File Photo by David Silpa/UPI | License Photo

The federation filed a brief Monday night opposing class certification. The 28 players filed the original lawsuit March 8, accusing the federation of "institutionalized gender discrimination," which the players say impacted their wages and the way they train and compete. The complaint also addresses promotion, support and development for the women's games.

"Pay should be based on performance, not gender," players' spokesperson Molly Levinson said in a statement Tuesday. "[The federation] tries to spin the undeniable fact that if men players won their games, they would be paid considerably more than the women are now.

"This is a tired argument from [the federation] that women players must work twice as hard and win every time men lose in order to try to be paid and have the same working conditions as the men. It runs counter to every American principle of equality, won't stop this case from going forward as a class action, and doesn't stand a chance in a trial."

A trial is scheduled for May 5. The players filed their motion for class certification Sept. 11 in U.S. District Court for the Central District of California. If the motion is successful, it would expand the scope of plaintiffs to include additional U.S. women's team players who are not among those listed as plaintiffs.

The class designation for the case could award players injunctive relief if they are a member of the team on the day of the final judgment or appeal. It also could provide back pay and punitive damages for players on the team at any point since Feb. 4, 2014.

"Plaintiffs' motion for class certification should be denied because the proposed class representatives Alex Morgan, Megan Rapinoe, Carli Lloyd and Becky Sauerbrunn were paid more than even the highest-earning MNT members and therefore have suffered no injury," the federation stated in the brief.

"Plaintiffs also claim that they were subjected to discriminatory terms and conditions of employment under Title VII," the federation said. "Noticeably absent from plaintiffs' motion for class certification is any evidentiary proof showing that the proposed class representatives meet the Article III constitutional standing requirements.

"Plaintiffs cannot meet these requirements, as shown by the evidence [the federation] attaches to this opposition showing that the class representatives made more than any other relevant [men's national team] player."

The women's players also said they were denied "equal playing, training and travel conditions" as the men's national team players, citing the quality of their playing surfaces. Federation chief commercial and strategy officer Jay Berhalter said in the brief filing that the women's team played turf on four occasions since Dec. 17, 2015.

The lawsuit will continue regardless of the court's ruling on the federation's filing. Players will still be able to participate on their own behalf if the court rules in favor of the filing.