March 8 (UPI) -- All 28 members of the United States women's national team are plaintiffs in a gender discrimination suit filed Friday against the United States Soccer Federation -- on International Women's Day.

The filing comes just three months before the team is to begin its title defense at the 2019 FIFA Women's World Cup in France.

Team players accuse U.S. Soccer of years of "institutionalized gender discrimination" in the lawsuit, which they say impacted their wages and the way they train and compete.

The lawsuit was filed under the Equal Pay Act and Title VII of the Civil Rights Act in U.S. District Court in Los Angeles.

"The USSF discriminates against Plaintiffs, and the class that they seek to represent, by paying them less than members of the MNT [men's national team] for substantially equal work and by denying them at least equal playing, training, and travel conditions; equal promotion of their games; equal support and development for their games; and other terms and conditions of employment equal to the MNT," the women players said in the lawsuit.

They demand to be paid the same as the men's national team.

Five women's team players filed a wage-discrimination complaint in 2016 with the Equal Employment Opportunity Commission. After a lack of progress, the players received permission form the EEOC to sue.

The lawsuit asserts that the U.S. Soccer provided the men's team with performance bonuses totaling $5.375 million for losing in the round of 16 at the 2014 World Cup, while the federation provided the women with $1.725 million for winning the 2015 World Cup.

"Despite gains achieved by the 2017 collective bargaining agreement between the USWNT players association and the USSF, the USSF's ongoing policies and practices of systemic gender discrimination also extend beyond pay and into nearly every aspect of players' work conditions," the women players said in a statement.

"This includes playing, training, and travel conditions; promotion of games; staffing including coaching, medical personnel and training, and operations; support and development for games and other terms and conditions of employment that are less favorable for female players than their male counterparts.

"The lawsuit filed today seeks an end to the USSF's discriminatory practices, and financial damages in order to address the pay gap for USWNT players, as well as liquidated and punitive damages and all other appropriate relief."

The U.S. National Soccer Team Players Association released a statement in support of the USWNT.

"The United States National Soccer Team Players Association fully supports the efforts of the U.S. Women's National Team Players to achieve equal pay," the statement said. "Specifically, we are committed to the concept of a revenue-sharing model to address the U.S. Soccer Federation's 'market realities' and find a way towards fair compensation.

"An equal division of revenue attributable to the MNT and WNT programs is our primary pursuit as we engage with the US Soccer Federation in collective bargaining. Our collective bargaining agreement expired at the end of 2018 and we have already raised an equal division of attributable revenue. We wait on US Soccer to respond to both players associations with a way to move forward with fair and equal compensation for all US Soccer players."

World News // 53 minutes ago
North and South Korea turn up heat by unveiling new missile systems
SEOUL, Sept. 16 (UPI) -- North Korea confirmed on Thursday that it indeed launched a pair of ballistic missiles from a train-based system, which was part of a flurry of activity in a week that also saw South Korea unveil missiles of its own. 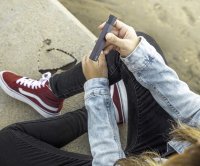 Health News // 4 hours ago
Study finds vaping common among people diagnosed with eating disorders
College students who vape appear to be at higher risk of having an eating disorder, a new study suggests.

Health News // 6 hours ago
Study: Blood cancer patients may benefit from COVID-19 vaccine booster
Patients with B-cell blood cancers who did not make antibodies to COVID-19 after two shots of vaccine may find that a third shot does the trick, new research finds.

Science News // 6 hours ago
Pet store puppies may be passing drug-resistant bacteria to people
It's hard to resist those big, pleading eyes in the pet store window. But buyer beware. Pet store puppies may infect people with a bacteria for which no common antibiotic treatment exists, a new study warns.
Advertisement